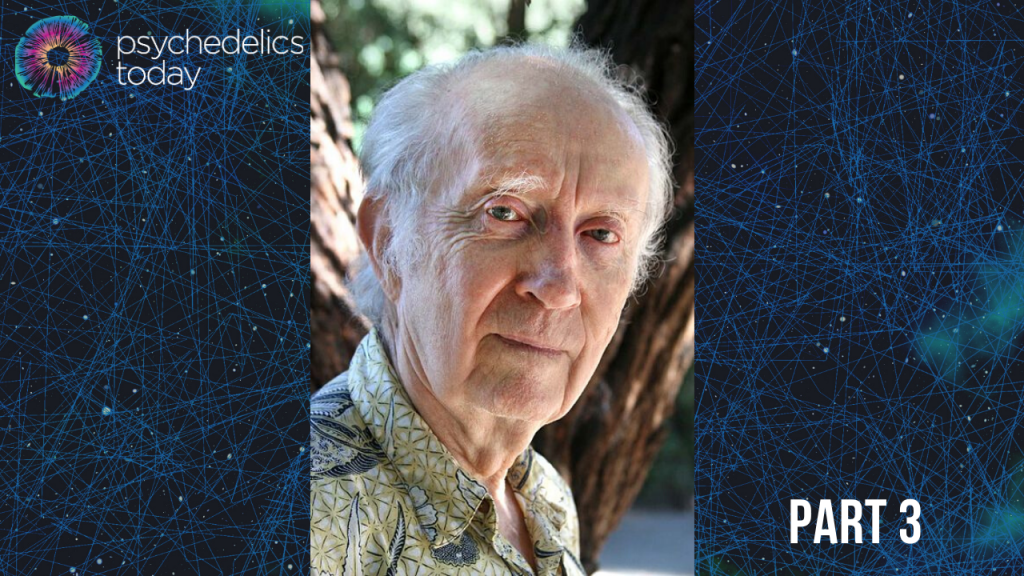 This is part three in a four-part series recorded in John Cobb’s apartment in Claremont, California. This was recorded during a small weekend conference on psychedelics titled “Exceptional Experience Conference.” You can listen to the full talk in this episode of Psychedelics Today.

John Boswell Cobb Jr. is an American theologian, philosopher, and environmentalist. Cobb is often regarded as the preeminent scholar in the field of process philosophy and process theology, the school of thought associated with the philosophy of Alfred North Whitehead.

John Cobb: There were lots of biologists who have worked with us that they rather resent being constantly pushed into mechanism when in fact they’re dealing with organisms. That organisms are only complex mechanisms. A lot of biologists know that isn’t right. So we have a chance of making breakthroughs, whereas I don’t think Rosemary Ruether, brilliant as she is… I hope you understand that I’m picking people. We get it. We take her with us when we are promoting process theology. Even if she will say, “Oh, I’m not interested in process theology.” What she says is process theology, so we don’t (laughs)… So the label is not that important, the insights are important. And in a foundational way, they are common sense.

I think the common sense is that our knowledge of each other is not just by visual and auditory clues. But people have been told so long that it is. If you could just have people who never went to school (laughs)….

Kyle: What else would it be informed by if it wasn’t visual and auditory?

John Cobb: Just by our immediate experience of each other.

Kyle: So a felt experience?

John Cobb: Yeah. I think that we’ve had an experience of being in a group where when you walk in, you feel a climate there. If you go into a room where everybody is angry with everybody, of course, you are told that you really are get visual and auditory clues. It doesn’t feel like that. You just feel this is not… The vibrations here are not good. Okay. So we need to deschool. Are you familiar with Ivan Illich’s book, Deschooling Society?

John Cobb: But of course we also need schools, and there’s no reason, in principle, that schooling has to be indoctrination into a bad worldview. It could be something else. And there are a few schools that are already doing something else.

John Cobb: Well, I think the one that Matthew Siegel teaches at in San Francisco CIIS. CIIS and Naropa are examples of a different educational system. I have not studied either one of them enough to hold up one and say it’s better than another. Another educational system that I think well of is The Great Books Program. It needs revision because in the past it’s only been the great Western books. And at Chicago when I was there, the college was operated on a great books basis. And I hope by now they have incorporated great books from other parts of the world.

It’s very different. I’m just saying, I think there are different kinds of educational systems that are better than what we have. If I’m just going to have the opportunity to create a school, it’s going to be a school that teaches ecological civilization. Because in my mind, a healthy human survival is a goal that ought not to be regarded as an eccentric and marginal one, but ought to be regarded as what all we human beings ought to be getting behind collectively together. And if you have a school for that, again, curriculum could really be quite varied, but you would try to see what do people most need? And I think that the production and consumption and sharing of food would be a very, very central part of it. But also we need to understand technology and understand how it can be used for truly humane purposes. We need to understand that capitalism has ignored much of reality.

In economics 101, you can find out what the assumptions are. They are wrong. So people should be told what the assumptions have been and why they’re wrong. Reflect together about better assumptions and what their implications are. How we can go about changing. I’m not giving you a curriculum, but you will understand. I’d try to get the people who know the most about curriculum in the abstract in general. What students at a certain age are likely to be ready to do. All those things are relevant to developing a curriculum. My role is deconstruction. I just want to make it clear what’s going on now is absolutely absurd.

Enlightenment is the worst curse of humanity. We have been enlightened into not believing all kinds of things. The disappearance of subjects from the world of actuality. If that’s enlightened, I don’t want to be enlightened. But I think we need a lot of reflection about the language we use. And of course language is a very popular topic. But the questions that I think are most important are very rarely asked.

Joe: One of my favorite parts of Whitehead is the re-framing of language. In kind of your book, Whitehead Word Book, that’s a really foundational thing. Our language carries weight, our words carry inertia that we’re not aware of.

John Cobb: And I’m sure that the reason we have 36 universities with Center for Process Studies in China and zero in the United States is that the Chinese… The idea that process is more fundamental than substance doesn’t seem strange to them. To us, we know it ain’t so because we got to talk about books and tables. Those are the really real things. And how do we know that? We know because we’ve been speaking that language the whole time.

Sight oriented people can know that there have been past events and they can study past events, but history as meaningful, as helping you to locate yourself in a long process, that comes only from Israel. And that used to be very important. I mean a lot of very secular… I mean you didn’t have to be believing Jew and believing Christian in the West to think history was important. If you’d think Hegle and Marx, I mean these are all history thinking people.

We need to understand how things got to be the way they are. What are the issues today coming out of that history? And I think that’s very important. But the university has finally excluded it almost completely. You see for science only what can be repeated in the laboratory (is true). First of all, what can be repeated. But the whole point of history is that events cannot be repeated. That automatically excludes history. Excludes a lot of other things too.

Kyle: I’m curious, you said you haven’t had any experience with psychedelics, but you feel really hopeful about their reintegration in society.

John Cobb: Yes, if they reintroduction in the way this group would do it (regarding a private conference at Claremont College). Obviously if they are reintroduced primarily for the profit of the reintroducer, I’m not confident it would end up being a benefit. The more people use the most expensive drugs, the more profit.

Joe: Right. And you know, skillfully used, you probably need less than 10 LSD experiences to heal most of what you’ve got. And to do some really creative work. Some people just have one and that’s it for their life. That’s a very different thing than drugs that are around for our whole life.

John Cobb: That would be sort of like a near death experience. One is usually enough.

Johanna: Were you there for Kyle’s story? Kyle had one at age 16.

John Cobb: No. I was not there yesterday afternoon.

Kyle: I got in a snowboarding accident and ended up rupturing my spleen, and I lost about five to five and a half pints of blood internally. I guess like where it started to become mystical was when I was in the MRI machine, CAT Scan machine, and they were trying to figure out where the blood was coming from. I was on the other side of the room with the doctors, but I was also in my body at the same time. I kind of describe it as like an orb of light kind of surrounded me, and a voice kind of appeared and said… It wasn’t an external voice. It seemed a little bit more internal, or maybe it felt experienced. I don’t know how to really put it into words.

John Cobb: You felt internal, but nevertheless, it wasn’t just you talking to yourself.

Kyle: Yeah. And something just said, “You’re going home, going back to the stars where y’all come from. And this is just a transition. The more you relax into it, the easier it’s going to be. This physical life’s going to cease to exist, but you’ll continue on.” And it was a really blissful kind of experience at that point, and I got excited, I was like, “Oh, I’m going home.” But then coming back to reality, it was difficult to reintegrate that.

John Cobb: Within the experience itself, there was nothing about coming back to reality?

John Cobb: Because many people report a kind of moment when there’s a decision made.

Kyle: Yeah. I think they caught me at the right time as I was really starting to slip away. They put me under anesthesia, but I didn’t remember anything. There was a felt sense that I went somewhere and I talked to something. But I couldn’t remember it. And when you say, we’re so fixed on the visual aspect, I mean, that’s what I think irritated me the most that sometimes people report going down a light or they see something. This was a felt experience. Like I knew something happened, but I couldn’t describe it.

John Cobb: In the auditory world, the location of the words… in the auditory, sometimes a meaning is communicated. And if you explain to somebody else, of course you have to put it into words, but it’s initial reality is not words. I think a lot of the time in the Bible when it says, God spoke to me and said such and such, people just felt called. And I’ve had that kind of experience. I’ve never had hearing in the liberal sense. But I just sometimes sit quietly for a while and then it just comes to me, there’s something I need to do.

Other books by John Cobb Jr.

A Christian Natural Theology, Second Edition: Based on the Thought of Alfred North Whitehead

Jesus’ Abba: The God Who Has Not Failed

For Our Common Home: Process-Relational Responses to Laudato Si’

About John B. Cobb Jr.

John B. Cobb, Jr., Ph.D, is a founding co-director of the Center for Process Studies and Process & Faith. He has held many positions, such as Ingraham Professor of Theology at the School of Theology at Claremont, Avery Professor at the Claremont Graduate School, Fullbright Professor at the University of Mainz, Visiting Professor at Vanderbilt, Harvard Divinity, Chicago Divinity Schools. His writings include: Christ in a Pluralistic Age; God and the World; For the Common Good. Co-winner of Grawemeyer Award of Ideas Improving World Order.