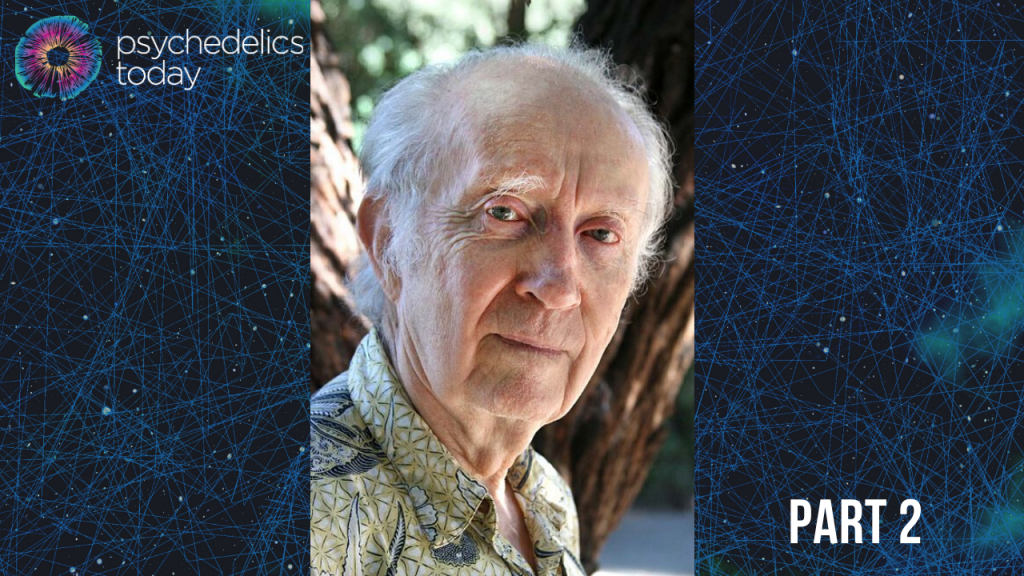 This is part two in a four-part series recorded in John Cobb’s apartment in Claremont, California. This was recorded during a small weekend conference on psychedelics titled “Exceptional Experience Conference.” You can listen to the full talk in this episode of Psychedelics Today.

John Boswell Cobb Jr. is an American theologian, philosopher, and environmentalist. Cobb is often regarded as the preeminent scholar in the field of process philosophy and process theology, the school of thought associated with the philosophy of Alfred North Whitehead. Cobb is the author of more than fifty books. In 2014, Cobb was elected to the prestigious American Academy of Arts and Sciences. A unifying theme of Cobb’s work is his emphasis on ecological interdependence—the idea that every part of the ecosystem is reliant on all the other parts. Cobb has argued that humanity’s most urgent task is to preserve the world on which it lives and depends, an idea which his primary influence, Whitehead, described as “world-loyalty”.

Kyle: Do you think what’s going on in the mind, say like neurotransmitters or electrical activity firing, that’s creating this reality, or the experience is having an influence on the neurochemistry?

John Cobb: It’s all experience. It’s a question of whether this is the experience of the neurons or of the psyche, and I think the evidence is that the psyche plays a role. One of the first people we worked with, a very famous physiological psychologist. And there was a man who did a lot of experiments on the split-brain. I’m sure there were other people. I think the name begins with an S, but anyway. He was over here at Cal Tech, so he was more accessible to work with. He really appreciated working with us because he found he could now formulate his findings. He was very, very clear that the evidence that he had was that conscious experience had a causal role.

It’s just common sense. I decided to put my watch back on and stopped fiddling with it and I put it back on. Amazing. Pure coincidence in terms of… Since purpose cannot play a role. I call it the metaphysics. It was wrong when it was only applied to other animals. It deepened the anthropocentrism since it was an only human experience that counted. But it’s just so absurd. Scientists who are busy engineering genetic change tell us that genetic change has no purpose. Purpose plays no role in the genetic change. I don’t think they believe it, but that’s what they have to teach.

Kyle: What do you mean by no purpose in the genetic change?

John Cobb: Because purpose cannot have a causal effect in the Cartesian world. Now, the other way they would say, “Oh, but I know that my purpose is actually completely the result of mechanical relationships between my neurons.”

Johanna: I have a question about the actual occasions.

Johanna: So what you say that the human being is an actual occasion?

John Cobb: No, I would say the psyche consists of a series of actual occasions.

Johanna: All right. So could you elaborate on this definition of actual occasions? I know that it’s a really hard concept.

John Cobb: Well, an absolutely basic question in traditional philosophy, I don’t know what’s taught under the rubric of philosophy today, I won’t address, is the question of what kinds of things are in and of themselves actual that would be in distinction from things which can be divided up into other entities. So an actual occasion would not be divisible into other actual occasions. And of course for a long time, beginning with some of the Greeks, the answer was an atom. An atom is indivisible. But that doesn’t keep it from actually existing.

Now for Whitehead, the word atom is so bound up with substantive thinking. For me to simply say an actual occasion is an atom would be confusing. But if you take the basic meaning of atom, the actual occasion is the basic unit of actuality. And of course saying that is an alternative to a substance way of viewing, and it doesn’t exclude the possibility other people will come up with other theories.

But I mentioned Quarks and Quanta, not that I know they cannot be divided further, but right now there is no clear indication that Quark is made up of other things. So it seems to be a unit of reality. So when we deal with living things, obviously if they are like us, have brains and so forth, we assume they have a psychic life, and the occasions of psychic life will also be atomic.

One of the things that I raised in one discussion that there was some evidence that plants also have some kind of unified experience. I don’t think it’s been studied enough to be making any clear pronouncements. But I don’t know whether I mentioned in the larger groups of Findhorn. Have you heard of Findhorn?

John Cobb: Okay. Well, the people there commune with their plants. They’ve been doing it for 50 years, so it’s not a fly by night. I think there are a lot of people who have a feeling about the tree that it’s not just a lot of cells interacting, but maybe the tree itself may have some purpose or something to say. But that’s all of what are the actual occasions, is an entirely different question from what it means to say it’s an actual occasion. Is that okay or do you-

John Cobb: And when you talk about a society of atoms like the sofa or the chair or the table, which are the kinds of things that standard brand philosophy, for a long time, held up. They’re clearly not atoms. Society as I was indicating, if you have enough actual entities, their dynamism disappears in the society as a whole. Making negative statements that are always very questionable, it’s hard for me to think that a stone is an experiencing entity. I think the molecules are. And I’m sure cells are.

Kyle: Okay, so the rock as the whole isn’t, but the molecules and the atoms are?

John Cobb: That’s right. I’m sure that those cells are influenced by the emotions of people. I don’t think a rock is, could be wrong, and it could be that the molecules are slightly, but that’s just canceled out. But the plant organization, I don’t think it gets canceled out. What happens to the cells affects the way they relate to each other and the total development of the plant. I hope you understand, again, having a particular conceptuality does not tell you just how it’s going to map out on real things, but Whitehead, so many things, well these are empirical questions and they’re important empirical questions. When I think some of the evidence is so great that I just go ahead pretend I know.

Joe Moore: You can see how this worldview seems very psychedelic.

John Cobb: That’s what we keep hearing. I mean even we who haven’t, who don’t know that we have psychedelic experiences, that the things that people report sound true to us. And if they are true, then how you got there is also of great interest.

Joe Moore: Did you have the opportunity to communicate with Stan Grof at all?

John Cobb: You know, I may. I’ve been at Esalen twice, and I kind of think he was there one time. I didn’t have any real conversation.

Joe: Okay. John Buchanan brought him here, I’m sure you’re aware, in 2015, for the big conference.

Johanna: You were very busy. Thousands of people.

John Cobb: I did not have conversations with…

Joe: Thankfully you did (have him at the conference). It was really great. Lenny and John Buchanan have been really pushing Whitehead on Stan, which is really interesting.

John Cobb: Yes. I mean I would like to offer it. If people are not interested, that’s-

Joe: Yeah. I don’t know if pushing is the right word.

John Cobb: It’s perfectly okay. Yeah. But I think when people who have had the experience hear that there is a philosophy which works very well with the cutting edges of science, that they’ll likely define that something positive. That doesn’t mean they have to go spend a lot of time reading Whitehead. And there are so many people who when I listen to them I would say eco-feminism. I’ll give a particular example. The eco-feminists I’ve known best, I mean the theological world, but they’re very strong eco-feminist. Mary Daly and Rosemary Ruether are two of them. Now Mary Daly knew some Whitehead and liked it, but Rosemary Ruether, everything she writes sounds just right to us. She said, “I will not read a word of Whitehead.” So I don’t think that Whitehead is the one and only way of arriving at what I… The reason I push him is that I’m very concerned by the institutions, and especially educational institutions that they have enormous power over what is considered good policy and so forth. And they are so wrong about it. If you say, “Oh, but psychedelic experience shows that’s a mistake.” It doesn’t really open the door for further conversation.

If you have a philosophy that can make more sense out of physical evidence that is taken seriously by physicists, I’m announcing that they are very, very slow to be interested. But at least among quantum physicists, Whitehead’s name is known and appreciated. And that could be an opening wedge that would mean that physics as a whole would adopt an organic model rather than a mechanical. That’s the usual way. We put it and fit.

Other books by John Cobb Jr.

A Christian Natural Theology, Second Edition: Based on the Thought of Alfred North Whitehead

Jesus’ Abba: The God Who Has Not Failed

For Our Common Home: Process-Relational Responses to Laudato Si’

About John B. Cobb Jr.

John B. Cobb, Jr., Ph.D, is a founding co-director of the Center for Process Studies and Process & Faith. He has held many positions, such as Ingraham Professor of Theology at the School of Theology at Claremont, Avery Professor at the Claremont Graduate School, Fullbright Professor at the University of Mainz, Visiting Professor at Vanderbilt, Harvard Divinity, Chicago Divinity Schools. His writings include: Christ in a Pluralistic Age; God and the World; For the Common Good. Co-winner of Grawemeyer Award of Ideas Improving World Order.