Ibogaine Treatment: A Psychedelic Answer to Opiate and Heroin Addiction 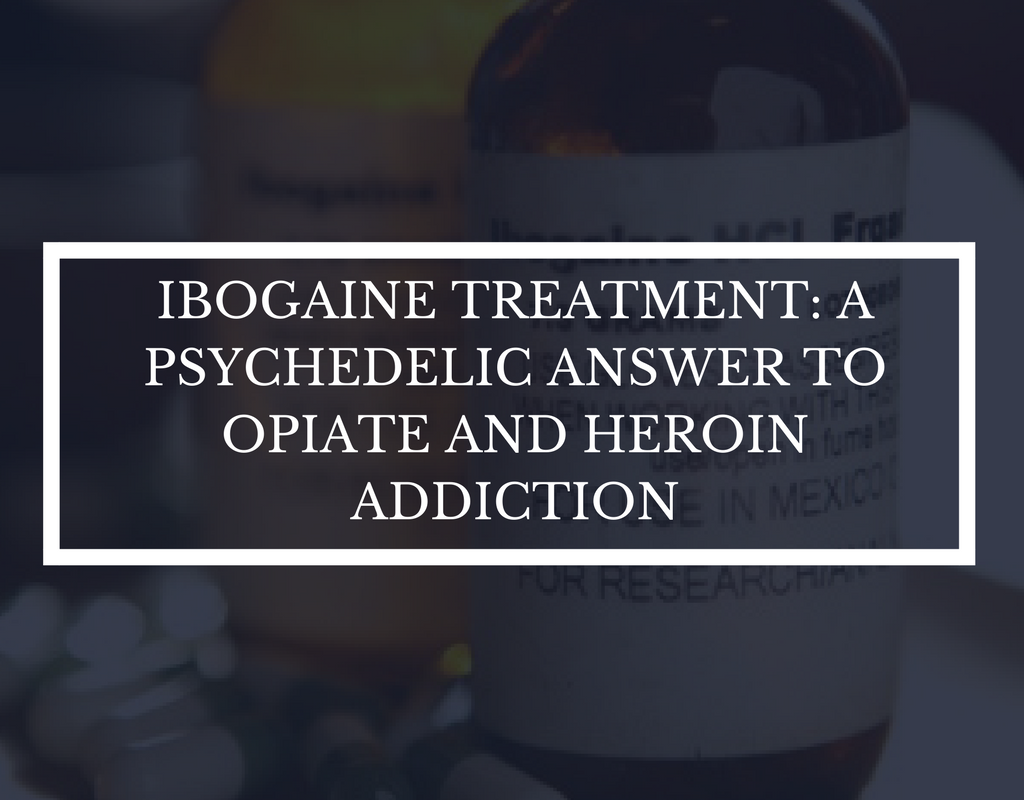 The use of heroin and abuse of opiate pain-relievers has reached an all-time high in the USA. The addictive nature of these drugs has left us scrambling for treatment options that can offer us freedom from this epidemic.

The fact is, traditional treatments don’t work for everyone, and many are starting to look for more effective alternatives. Treatment that results in long-lasting sobriety is different for each individual.

When a traditional method isn’t working, it may be time to consider something new. Ibogaine is one such treatment, and the rise in opiate addiction has led to an increased interest in this alternative treatment for opiate and heroin addiction.

Ibogaine is just one of the many alkaloids found in the Tabernanthe Iboga shrub. Raw Iboga is one of the most powerful psychedelic plants in the world and has been used for its profound spiritual effect on those who experience it.

This is why, for centuries, the Bwiti religion of Africa have been using Iboga as a way to induce introspection and a higher self-awareness.

In the early 1900s Ibogaine was extracted from the Iboga root and used by athletes, in very small doses, as a stimulant. At the time, Ibogaine was used because of the way that it excites certain pathways within the brain.

Ibogaine as an Addiction Treatment

Howard Lotsof was suffering from an addiction to heroin when he tried Ibogaine for the first time in 1962. He was 19 years old and experimenting with any substance he could find.

Hours after trying the Ibogaine, Lotsof had an epiphany—he had not taken opiates for almost a day, yet, he had no withdrawal symptoms.

He waited, but the withdrawals never came.

Ibogaine had allowed Lotsof to break his heroin addiction with just one dose. He knew immediately that these implications could have a massive impact on others who were struggling with heroin and opiate addiction.

But, given the importance of this conclusion, Lotsof realized he needed to perform further testing. So, he rounded up a few of his opiate and heroin-addicted friends, gave them the Ibogaine, and the results were stunning—none of his friends went into withdrawal.

This was the beginning of Ibogaine treatment for addiction. As Lotsof introduced more and more studies on the effects of Ibogaine on withdrawal, it became a real point of interest for scientists who were looking for more effective ways to help addicts beat their dependence.

Unfortunately, this also came at a time when the US government began making psychoactive substances illegal. Ibogaine was classified as a Schedule 1 drug, putting it in the same class as the drugs that it was meant to treat. It also made it very difficult for scientists to study its positive effects on addiction.

Lotsof was forced to study Ibogaine and treat addicts in Europe, where he founded the Global Ibogaine Therapy Alliance. He worked hard to try and change the laws in the USA and other countries, but, unfortunately, lacked the resources he considered necessary to do so.

How Does Ibogaine Treat Physical Withdrawal?

Ibogaine has a unique effect on the chemical levels in the brain.

When the addict begins using opiates, these drugs release massive quantities of chemicals that plug into the brain’s neurotransmitters.

The brain becomes addicted to these high levels of pleasure-inducing chemicals, changing the way that the brain would normally function.

Because of these addictive adaptations, when the supply of drugs is cut off, the brain goes into a frenzy. Depression, seizures, and other symptoms are often the result. This is what we call withdrawal.

Ibogaine has the ability to work on the chemical receptors in the brain. It repairs neurons in the brain that have been damaged due to opioid addiction. It also restores balance to the brain so that naturally produced chemicals can work properly to control feelings of pleasure and happiness.

This gives addicts a fresh start, and the ability to start focusing on changing their lifestyle, instead of just fighting withdrawals.

But Ibogaine doesn’t just treat the withdrawal symptoms, it also affects the brain on a psychological level.

In many addicts, though not all, Ibogaine induces a dreamlike state.

Those who have experienced this state often say that Ibogaine made them face their fears, past traumas, and helped them conquer many of the underlying reasons that caused their addiction in the first place.

This kind of psychological clarity and introspection is unique to the effects of Ibogaine and psychedelic medicines.

This is also why Ibogaine has been recommended, by some, as a treatment for trauma and other mental conditions—such as depression, anxiety, and PTSD.

The psychedelic effects of Ibogaine have the ability to treat these mental issues in ways that therapy never could. Some describe it as taking a look at themselves from the outside in, finally being able to address the core of their problems and address the root cause.

Is Ibogaine Right for You?

Just like any other treatment method, Ibogaine requires close supervision from medical professionals. Because of the way Ibogaine reacts in the body, it can be dangerous. This is why it is recommended that Ibogaine treatment should be done in a medical setting.

No treatment is risk-free, and it’s important to be educated before undergoing treatment with Ibogaine.

Addiction is a deeply personal disease and one that requires a different type of treatment for every individual. Ibogaine is not for everyone. It’s important to look into all of your options and talk to your physician.

Sobriety is possible. Every individual deserves a happy and successful life. Take the time to study all of the treatment options available and make the right decision for you or your loved one.

Aeden Smith-Ahearn was a massive heroin addict for 7 years. After trying every traditional treatment method available, he put his last hop into Ibogaine treatment. Now, he has been clean and sober for 5 years while also helping thousands of addicts find freedom through Ibogaine. He is currently the treatment coordinator for Experience Ibogaine treatment centers and works hard every day to help people find success and happiness in life.