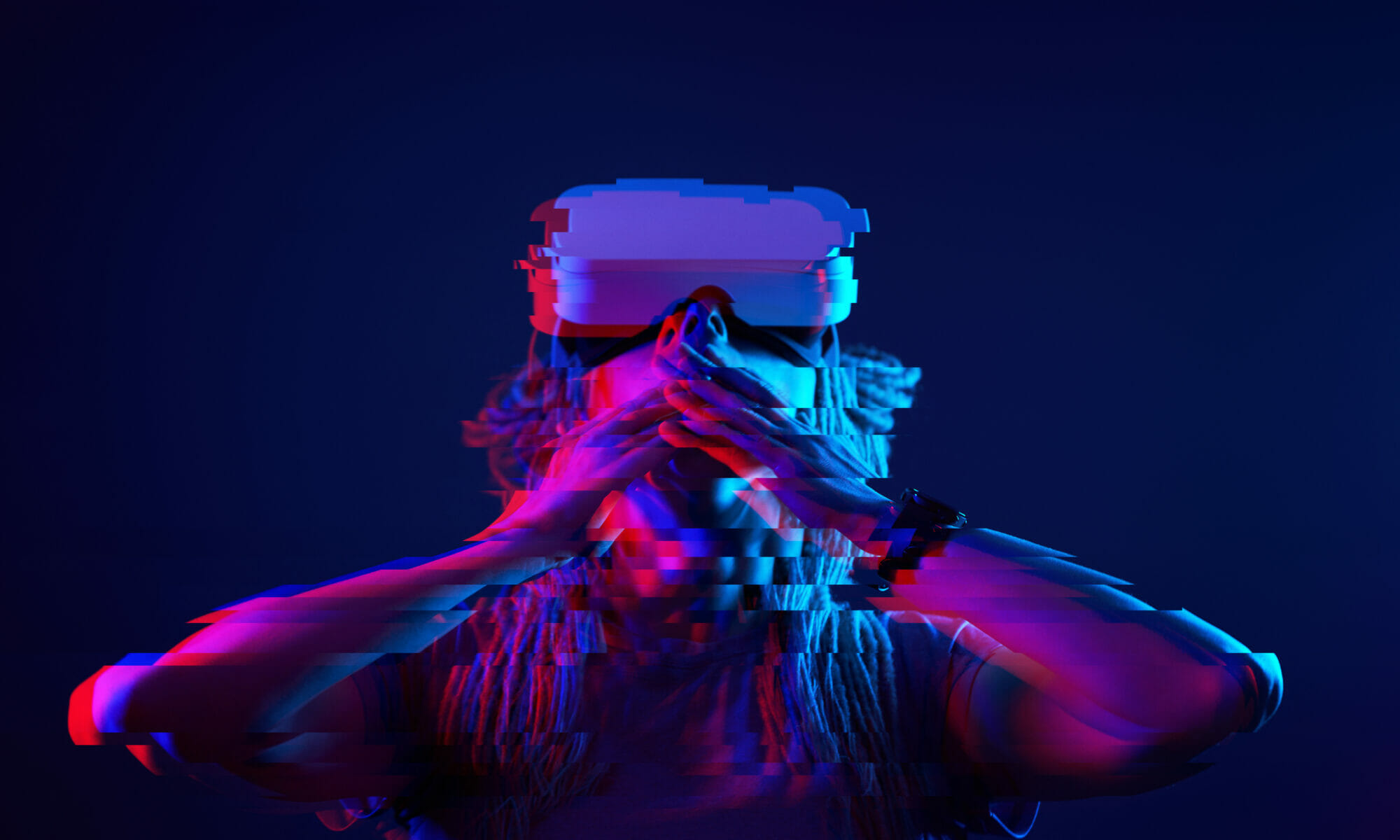 Psychedelic VR—or virtual reality claiming to give users a psychedelic trip—is here, but is there any truth to the claims? And theoretically, how would it work?

A few years ago I took five grams of psilocybin mushrooms and went to the E3 video game expo in Los Angeles only to be lost in a world of virtual reality. It’s not something I would suggest for everyone, unless you want to spend the rest of the day wondering if cosplayers are just regular people from the future.

There’s an untethered prism of technological potential that has been emerging from VR in the past decade. However, you’re reading this because you want to know if a person can have a psychedelic trip while in VR. The short answer is ‘no,’ and any VR company that makes these claims is not being truthful. The long answer is—definitely not right now, but the more neuroscience and technology advances, the closer we will come to having a psychedelic trip exclusively in virtual reality. I’ll explain one of those ways, but first how did we get this far with virtual reality?

A Brief Rundown on the History of VR

Let’s get the definitions straight. Virtual Reality (VR) is the complete immersion within an artificial world usually through a headset. Augmented Reality (AR) is the addition of virtual components to reality, like an email notification that appears in your vision, usually through glasses. Mixed Reality (MR) is the combination of VR and AR that brings together the digital and real world. An example would be a real-world object that is QR-coded so a person can see a virtual image emerging from the object when wearing mixed-reality glasses. Microsoft HoloLens is pioneering this technology. Finally, there’s Extended Reality (XR) that’s a blanket term that combines VR, AR, and MR.

When was Extended Reality invented? The history is debatable—was it the Ancient Greeks that constructed theaters and used the science of acoustics to mimic reality on stage, or should we go back to cave dwellers and their ‘subterranean cyberspaces’ they crafted filled with imagery that replicated the outside world? Let’s skip a few centuries, past Sir Charles Wheatstone’s 19th century stereoscope and Ivan Sutherland’s ‘Sword of Damocles’ machine of the 1960s, and go straight to Thomas Furness’ VCASS (that is, Visually Coupled Airborne Systems Simulator) built in 1982. It was astronomically expensive, and the technology alone filled up several rooms with computers. However, it was the first VR headset to fully immerse the user in an interactive artificially-manufactured world.

Aside from a few Hollywood films like “Lawnmower Man” and “Johnny Mnemonic” in the early ‘90s, VR didn’t really explode into mainstream culture like it was intended to. By 1999, the VR industry was deceased. Not like it laughed itself to death, but the world laughed the technology out of existence. It would take another decade and a 17-year-old named Palmer Luckey to invent the Oculus Rift, the current standard for virtual reality. Now, every VR headset available on the market is built on Luckey’s binocular LCD innovation.

The Neuroscience of Psychedelic VR

You’re a virtual reality history buff now, so let’s talk about the capabilities of the technology and why all claims that it can induce a psychedelic trip are misleading and erroneous—if not outright lies.

Currently, the only way we know a psychedelic trip can happen is through direct interaction with 5-HT2A neural receptors. When a person ingests psychedelics, those substances sit in these receptors. The molecular neuroscience of this process is largely unknown, and psychedelics can also induce other neurological changes like thalamic afferents and shifting cerebral blood flow between cortical regions. We’re still trying to understand why this happens, but the one consistent occurrence is the excitement of the 5-HT2A receptors in the brain.

That should be the end of the story, but you guys want to dive deeper in the rabbit hole—so let’s do it.

I spoke with neuropharmacologist and founder of Psychedelic Support, Dr. Alli Feduccia, about the possibility of inducing a psychedelic trip exclusively through VR—without the interaction of 5-HT2A receptors. She said while it’s highly unlikely, it’s theoretically possible through what’s called ‘neural oscillations.’

Neuroscience discovered some neurons and even entire regions can be activated through neural oscillations, which is the synchronization of activity in certain regions of the brain. For example, when a person speaks you understand them better when you look at their face to receive visual information (happiness, sadness, etc.), which aids the auditory information (what they’re actually saying) that’s being processed in your brain. Those two sensory inputs (auditory speech and visual facial cues) are coupled as a neural oscillation.

It’s been proposed that oscillations also reflect changes in the excitement of neurons from these sensory inputs. Excitement from these neural oscillations mostly show dendritic synaptic activity in the brain—the place where serotonin receptors reside. The synaptic activity seen through this neural oscillation is a ‘ping-pong’ effect bouncing between pyramidal cells (the brain cells that process serotonin) and inhibitory interneurons (neurons that assist the activity of pyramidal cells). Theoretically if any extended reality device can create a collection of sensory inputs (visual, auditory) and vestibular inputs (balance, direction) to create a ‘transient evoked’ (a response to discrete stimuli) or a ‘steady-state evoked’ (response to periodic rhythmic stimuli) neural oscillation that would be strong and complex enough to excite certain brain regions responsible for psychedelic trips like the medial prefrontal cortex—then we would be able to see technology like VR induce a psychedelic trip.

All of this sounds like it’s possible only because I explained it to be understood. In reality, neural oscillations from an exogenous stimuli like VR that would activate a cortical region like the prefrontal cortex to excite the 5-HT2A receptors and induce a trip is a scientific and technological process that hasn’t been invented yet. In fact, we aren’t close to having even the fundamental understanding of these systems to begin the research and development of technology that would be capable of doing this. It would be like creating the Deathstar and all the technology inside entirely from cardboard. Oh, that’s happened already? Well I take that back.

What Psychedelic VR Is, Isn’t and Could Be

When I spoke with @Trippy, the largest psychedelic community in the world (1.7 million followers and counting), about the potential of creating a psychedelic trip through technology, the curator said,“It’s impossible to deliver or duplicate an authentic psychedelic experience utilizing only technology. Humanity finds a sense of comfort in believing we can quantify or recreate all things. We have an unending desire to control things outside our understanding.”

The long and short of it is, there are a lot of VR companies out there that want you to believe they have invented a way to have a psychedelic trip through digital means. This could be the result of overzealous writers dropping extraordinary headlines and less about the CEOs of the VR companies that are represented. Everyone wants a good story, especially when you’re in the market of garnering investor interest for a capital raise.

A company that was brought to my attention is the Los Angeles-based VR company TRIPP (not to be confused with @trippy). Judging by the name one would easily believe the company is rooted in the psychedelic experience. Even their site suggests that for only $19.99 you can “start TRIPPing”. When I reached out to the company with a few questions (the first being, “Why do you think TRIPP works?”) the PR department sent me this:

“TRIPP does not elicit a psychedelic experience, nor does it act as/mimic a serotonergic agonist. TRIPP is simply a digital tool to help you manage stress and your emotional well-being. We don’t make claims on therapeutic efficacy.”

Certainly not the response many were hoping for—considering in June 2021, CEO of TRIPP Nanea Reeves told TechCrunch: “Many people that will never feel comfortable taking a psychedelic, this is a low-friction alternative that can deliver some of that experience in a more benign way.”

We’re not picking on TRIPP, there are far more dubious claims from individuals that suggest they have the technology to put the brain in altered states. Right around the VR craze in the mid ‘90s, Stanley Koren came out with the ‘God Helmet,’ a device that claims it can give the wearer a feeling of otherness, similar to the subjective effects of DMT and ayahuasca.

Through oscillations of low magnetic fields, the God Helmet allegedly disrupts the communication between the left and right brain lobes, which gives a person the perception of another ‘godly’ presence. There’s only one problem: No one has fully been able to replicate Stanley Koren’s claims with their own God Helmet study.

None of this is meant to degrade VR’s therapeutic use, which has been proven in clinical studies. For instance, Hunter G. Hoffman’s 2004 ‘Snowworld VR’ study showed patients can withstand pain longer in a tranquil virtual environment, the first evidence in history that VR changes brain activity during painful procedures.

VR is not an alternative that can deliver a psychedelic experience. If there’s one thing from this article to take away, it’s that. In the future, however, this statement has the possibility of turning around, and judging by the advancements in neuroscience along with an array of psychedelic research being unraveled, it will most likely be untrue. But for now, we’re still a long way to go before VR will give you a psychedelic trip.

Zeus Tipado is a neuroscientist based out of Los Angeles, California. He’s the founder of Stonedgamer and Middleeasy, and co-producer/host of DoubleBlind Mag’s ‘How To Use Psychedelics’ course. His published work has appeared in High Times Magazine, MERRY JANE, and DoubleBlind Magazine. He received his Mphil from the University of South Wales and will start his PhD in Neuroscience with a focus in psychedelics in 2022. You can reach him on Twitter, Instagram, and Twitch.