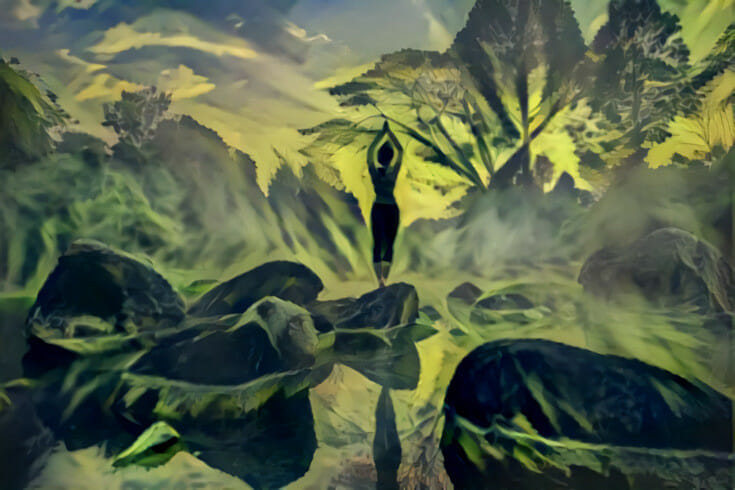 When we think of psychedelics, we don’t often think of cannabis. But in an era when people are turning to alternative medicines for mental health, can we use cannabis as an adjunct to therapy?

As people eagerly anticipate MDMA’s forecasted legalization as a therapeutic adjunct for treating PTSD, others are turning to a popular plant medicine to work through trauma.

When people hear that cannabis is used in therapy, they often respond with confusion. Cannabis is often thought of as a drug to avoid or dull pain and trauma—not a medicine for healing it. But, if the psychedelic renaissance has made one thing clear, it’s that intention can transform a drug experience into a journey of profound healing.

Daniel McQueen is regarded as a pioneer of “psychedelic cannabis,” or using the plant to experience insight, growth, and healing. After earning a masters degree in transpersonal counseling from Naropa University in 2012, McQueen founded Medicinal Mindfulness, an organization dedicated to promoting safe and intentional psychedelic medicine practices for personal and global healing, and transformation.

When Colorado passed its adult-use law in 2014, the organization focused on harnessing the plant’s psychedelic potential in “conscious cannabis” circles. Like many plant medicine ceremonies, these groups involve intention setting, ceremony, music, and breathwork to enhance the psychedelic experience and catalyze a powerful internal experience. From these groups, McQueen developed cannabis-assisted psychedelic therapy, where clients use THC as an adjunct to their one-on-one therapy.

In 2014, no other organization approached cannabis with a therapeutic lens. In recent years, other businesses have launched clinics using the same concept. From Massachusetts to Alaska, there’s now some form of cannabis-assisted healing found across the USA.

Due to Colorado’s cannabis laws, Medicinal Mindfulness can offer their services above-ground. An agreement with the clinic’s landlord allows clients to vape cannabis oil or use a tincture in the therapy session, so long as the client provides their own cannabis. While doctors may refer patients with Post Traumatic Stress Disorder to the clinic, a referral is not necessary because PTSD is a qualifying condition for the state’s medical-cannabis program. Plus, you don’t need a card to procure cannabis anymore.

“We’ve never had a legal issue,” McQueen explains. “In Colorado, you can get a medical marijuana card for PTSD. We’re just [addressing trauma] in a novel container.”

That container is a therapy office and assistance with personal growth and emotional healing. Medicinal Mindfulness’s therapeutic container is built on a foundation of trust, connection, and empathy, so clients feel heard and safe before entering a vulnerable emotional state. These sessions also involve talk therapy and going inward, or lying down with an eye mask on and listening to slow, relaxing music, while the therapist leads a guided meditation or other support.

Dr. Carla Clements is Medicinal Mindfulness’s Clinical Advisor. On top of having served as chair of Naropa’s transpersonal counseling department and as the independent rater for MAPS Phase II MDMA study, Dr. Clements has 35 years of clinical experience specializing in helping women with PTSD. She describes the ideal container as a place where clients can feel seen and heard. This gives them space to relax into a sense of safety, which is essential for healing trauma.

“Trauma is not just the mind being captured by a traumatic event,” Dr. Clements says to Psychedelics Today. “We now know trauma is buried deep in the body’s neurological system.”

The curve chart—used by Dr. Clements to explain trauma—represents the spectrum of possible emotional experience. Most experiences occur near the middle. Stress pulls one to the right, while relaxation opens to the left. The far right of the curve represents severe trauma. People with this type of trauma often become trapped in that small sliver of emotional experience. “The normal range of emotions gets crushed into the trauma reaction,” explains Dr. Clements.

In contrast, the far left represents a height of pleasure and satisfaction or a “peak” experience. The sympathetic and the parasympathetic cannot function at the same time, however. So, if a person is trapped in the SNS, the bliss and relaxation of the PNS is impossible—unless something breaks them out of their rut.

“What we’re learning about psychedelics,” Dr. Clements explains, “is that they have a peculiar ability to help people restore normal functioning in the PNS/SNS balance.”

Similarly, Dr. Clements believes cannabis is a highly-underestimated modality that can evoke healing experiences on par with more traditional psychedelics. “We minimized the power of cannabis,” she says. “We called it a ‘weed.’ We didn’t understand its healing power, and we’re finding our way back now.”

She sees that when we use cannabis with intention, ritual, and support, it can help people “touch that peak place inside,” widening the spectrum of emotional potential. In the therapeutic container of empathy and trust, she invites the patient to relax and focus on their embodied experience by deepening their emotional awareness. As they focus on relaxation, the patient creates new neurological memories outside SNS panic. In this state, Dr. Clements can help clients integrate these new feelings into their lives, ultimately making pleasant, calm emotions more accessible.

Dr. Clements explains that during integration—the session that happens post-plant medicine to help patients integrate messages, ideas, and new perspectives into their lives—patients can experience and relive positive feelings similar to the way they recall negative emotions about their trauma. “Now, there’s a tiny bit more balance, a little bit of good against that tidal wave [of negative emotions],” she says. “[They] then can create a structure around that memory, a healing trajectory where goodness can expand.”

So, why isn’t every therapist incorporating cannabis into their practice? Unfortunately, all evidence showcasing cannabis’s healing power is technically anecdotal. This is largely due to the plant’s Schedule I status, and the DEA’s archaic regulations forcing researchers to study notoriously weak cannabis flower grown at the University of Mississippi—product that pales in comparison to what’s available in dispensaries.

Dr. Clements admits her model—focusing on cannabis’s effects on the nervous system—is less aimed at scientific validity than communication of complex issues. She describes her model as a way of “understanding what’s occurring inside, with some science and metaphor mixed in.”

The scientific language of the SNS and PNS can help people understand their experience of trauma. But the curve is ultimately an allegory for one’s internal experience, a way of visualizing severe trauma and one’s inherent potential to heal.

Interestingly, Dr. Clements’s model is comparable to MDMA treatment in several ways. For instance, MDMA regularly energizes sensations of love, empathy, and relaxation. It allows trauma survivors to have peak experiences, ultimately rebalancing the nervous system. Still, there are key differences between using MDMA and cannabis to heal trauma. A cannabis experience is shorter, allowing people to use the plant day-to-day without much disruption. The comedown is gentler, too, compared to MDMA, which is often followed by a period of depression from serotonin depletion. Most significantly, cannabis does not overwhelm the participant, which is essential when working through the complexity of PTSD.

“With cannabis, there’s a lot more agency and control, which people who have been traumatized really benefit from experiencing,” says Dr. Clements.

Still, Dr. Clements doesn’t believe that cannabis therapy can produce the results seen in the MDMA trial, where 68 percent of participants no longer met the criteria for PTSD. McQueen disagrees, however. “I’m becoming more and more convinced that cannabis, when used skillfully, may be as effective as MDMA in treating PTSD,” he writes in Psychedelic Cannabis; Breaking the Gate, his most recent book.

Then why do some folks experience paranoia and dissociation when medicating with cannabis? For McQueen, it comes down to the classic concerns of set and setting—a concept generally overlooked in cannabis consumption—and, McQueen’s contribution: Skill.

Skill involves blending flower strains with equal weights of sativa, indica, and hybrid. McQueen recommends making a ritual of the process by setting intentions through meditation or prayer. With clients, skill also incorporates a ceremonial approach and helping clients with therapeutic interventions and shamanic practices. That includes breath work and somatic releasing or discharging stored tension from the nervous system through organic processes such as crying, laughter, and even physical shaking.

“We’re creating a container to allow our clients to gently turn toward their present moment experience with relaxation and acceptance,” McQueen explains. “With these special blends of cannabis, you can mimic the physiological effects of MDMA. The body shakes out the trauma like they do in MDMA sessions. I’ve seen transformational results in just a few sessions.”

“Cannabis medicine is a very soft provider of lessons,” Dr. Clements explains. “If you’re open and relaxed, you can have profound psychedelic experiences where you touch the peak—you feel it, you are in it, and it is you. When people have that again, it is life-transforming.”

Cannabis appears to facilitate more healing than its reputation suggests. In many states, it is already accessible. “It’s legal, it’s affordable, and it can be scaled up to groups—and you can grow it in your backyard,” McQueen points out. With his book and training, he’s trying to spread the word as far as possible. Because, ultimately, everyone has the right to heal. “The gentler we are, the slower we go, the more permission we have to take care of ourselves—the faster we actually move through these transformational processes.”

Sean Lawlor is a writer, certified personal trainer, and Masters student in Transpersonal Counseling at Naropa University, in pursuit of a career in psychedelic journalism, research, and therapy. His interest in consciousness and non-ordinary states owes great debt to Aldous Huxley, Ken Kesey, and Hunter S. Thompson, and his passion for film, literature, and dreaming draws endless inspiration from Carl Jung, David Lynch, and J.K. Rowling. For more information or to get in touch, head to seanplawlor.com, or connect on Instagram @seanplawlor.