He is also the director and lead editor of something we’re quite proud of here at Psychedelics Today: our new TV show, “Psychedelics Tonight”; a series of 30-minute episodes hosted by Joe and Kyle exploring lesser-explored psychedelic compounds, presented through ALTRD.TV. Episode 1, “Investigating Iboga – The African Plant with Sacred Roots,” premiered last night, and a new episode will air each Monday through October at 6 p.m. PST. Since this podcast was recorded while the show was still being filmed, they don’t go into it much, but we will be having more in-depth discussion after season 1 finishes, and want to know what you think! To watch for free, click the link in our bio or head to ALTRD.TV and search for Psychedelics Tonight.

Hurwitz discusses his past of feeling almost addicted to LSD exploration; his art and how LSD helped him overcome the classic artist’s restrictive “I’m not good enough” paradigm; Sarajoy Marsh’s Trauma-informed, Brain-sensitive Yoga being used in prisons to essentially create wellness communities; psychedelics and creativity; Nietzsche’s notion of Apollonian and Dionysian forces; entropy and negentropy; the relationship between psychological unwinding and sexuality and his realization (during a psychedelic experience) that he was queer; and how artists can differentiate themselves in a world where art is more readily available than ever.

“[LSD] helped me relinquish the idea that I am creating and that I am anything, and instead, just succumb to the process and engage with the medium in the way that one would a lover. And again, maybe that’s too heady or silly, but just being present with the art is what I think allows it to reach its fullest blossom, and just trusting the fact that I’m doing the best I can.”

“I think that love on a spectrum and sexuality on a spectrum is so much more chaotic than the firm binary that we’ve put [faith] into for so long. And again, if psychedelics are something that open up your perspectives, it allows you to sort of break models that you’ve been born into and raised with. And for a lot of people, that’s discovering that their experience (wherever it falls on that spectrum) is maybe outside of what we’ve been calling the norm for a long time, as opposed to necessarily what is the norm. I suspect that the norm is that the experience of love and sexuality is so, so, so, so much more diverse than we’ve been characterizing it as for a very long time.”

“I think that a lot of the drive for art comes from a need to communicate love and connection, and in a lot of ways, that connection is the experience of God. And I think that, in a sense, art comes from almost a divine place in that regard, and psychedelics are also a tool for us experiencing that. Again, I’m not a religious person by any means, but psychedelic experiences are often spiritual experiences, and I think it’s because they touch on the same thing: what it means to live in oneness with the world.”

Be Here Now, by Ram Dass

The Way of the Psychonaut Vol. 2: Encyclopedia for Inner Journeys, by Stanislav Grof, MD, PhD

The Birth of Tragedy and Other Writings, by Friedrich Wilhelm Nietzsche 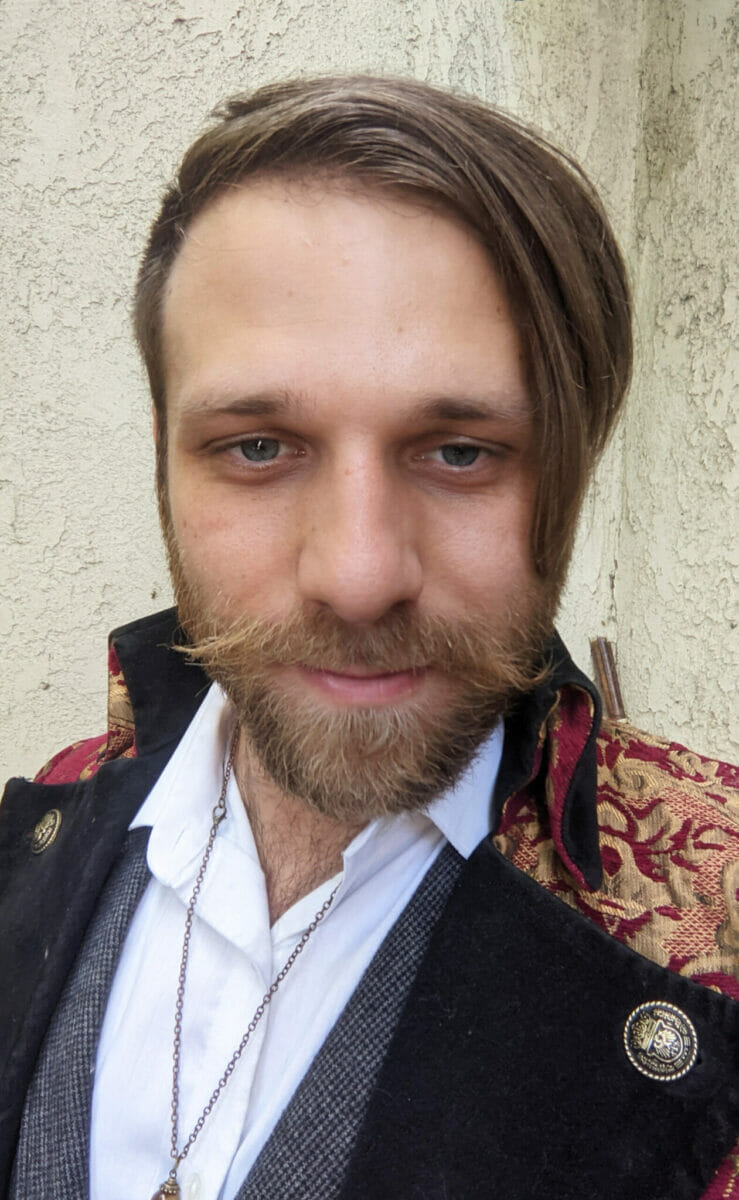 Sawyer Hurwitz, better known as Psychotronic Solutions, is an augmented reality collage artist living out of Los Angeles, CA. His work has shown in galleries and festivals around the world. Psychotronic Solutions’ collages are intricate meditations on topics ranging from gender dynamics to environmentalism to artificial intelligence and more. To hear more and to see his work animated, visit psychotronicsolutions.com.