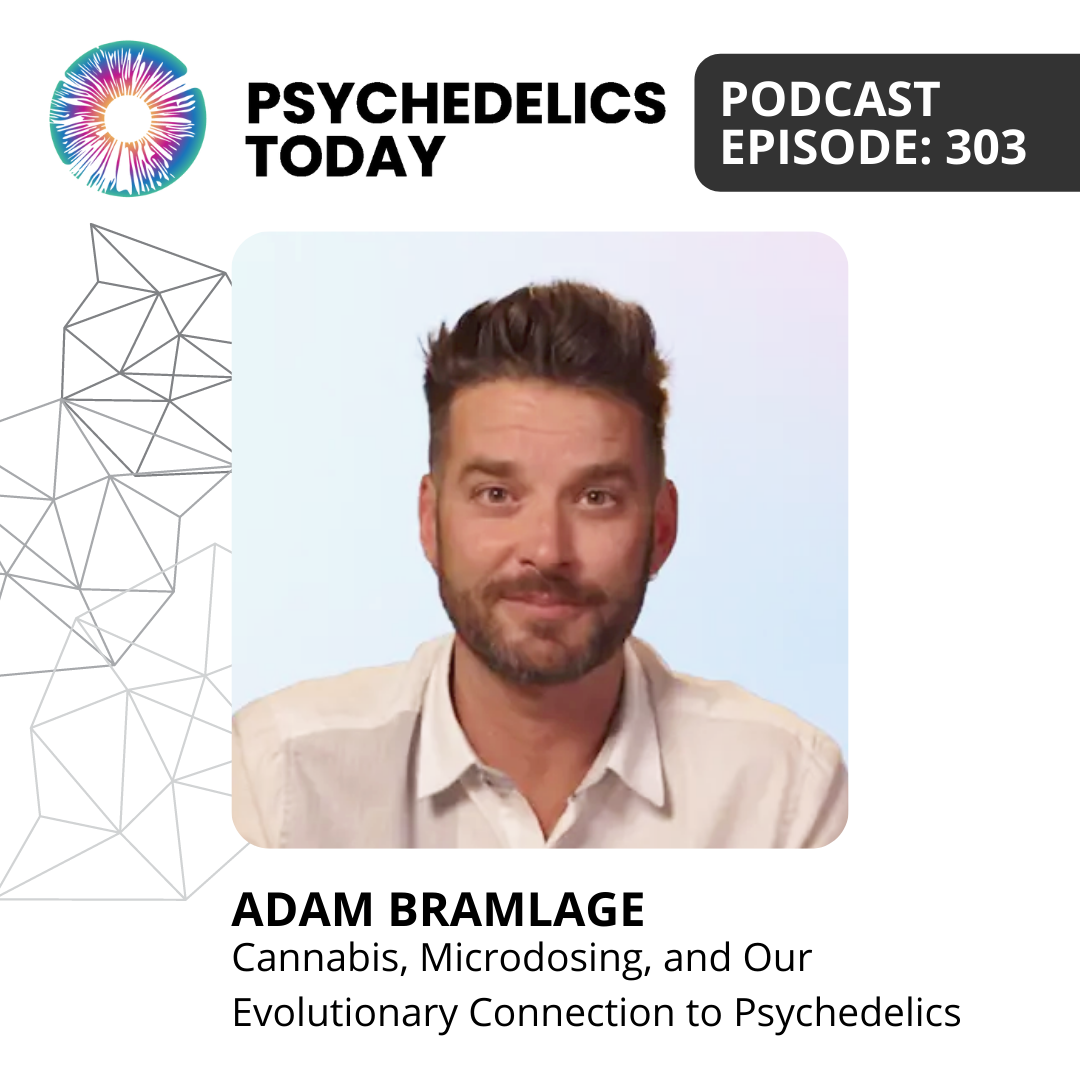 In this episode of the podcast, Joe interviews Adam Bramlage: Founder and CEO of Flow State Micro, a functional mushroom company and microdosing educational platform.

In this episode of the podcast, Joe interviews Adam Bramlage: Founder and CEO of Flow State Micro, a functional mushroom company and microdosing educational platform.

Bramlage talks about his journey to psychedelics and discovery of microdosing, and how he worries that the troubling issues he saw in the legal cannabis industry are already finding their way into the psychedelic space. He discusses what he experienced when he started microdosing; how he connected with James Fadiman; how he defines microdosing; the concepts of neurogenesis and a gut-brain axis; how more and more professional athletes are using psychedelics to heal brain injuries as well as optimize performance (and how leagues may handle this going forward); concerns over chronic microdosing; and why the goal is always to microdose less over time.

While we expected to hear about the benefits of microdosing, their conversation also goes deep into its history and our ancestral connection to psychedelics (particularly psilocybin), touching on Hernán Cortés; R. Gordan Wasson banking for the vatican; Christianity, Jesus, and mushrooms; repeated examples of control through the erasure of history; Tim Leary; Al Hubbard; MKUltra; the Tarahumara Indians’ peyote-influenced ultra-running; cave paintings; Whitey Bulger, and more.

Bramlage is a speaker on May 27th’s Microdosing Summit (along with Joe), and just released a new “Microdosing Movement Masterclass” in collaboration with the San Francisco Psychedelic Society, which focuses on our ancestral connection to psychedelics and the potential evolutionary use of microdosing. Use code psychedelicstoday at checkout for 10% off!

“I’m a single dad to two kids, and both of those kids, at periods of time in their life, were raised on a cannabis farm. And what I’ll tell you is this: when you normalize these plants and these tools and it’s just like a flower or a squash that my kid sees farmed like the farmer next to me, my kids want nothing to do with cannabis. It is so uncool. It’s the last thing they want to be around. I don’t have any worries about my son or daughter smoking pot. And why? Because we normalized it. And if you look at Portugal and what they’ve done with drugs and the success they’ve had with decrim legalization, supporting substance abuse issues with therapists and programs; this is the future. This is the answer.”

“We have an ancestral and evolutionary connection to these plants and it’s only in the last couple hundred years that they’ve been made illegal and bastardized. …We’re putting five or six year old kids on Adderall (which is methamphetamine), but we’re pointing fingers at a parent who gives their kid 10 milligrams of a mushroom.”

“Psychedelics have an afterglow, or a 48-hour effect, so you don’t need to microdose seven days a week. You can take it on a Monday, take Tuesday off, and you’re still getting benefits. So what I see over time with microdosing is the more people use it, the less they need it. This isn’t a Western medical model of: you’re going to take microdoses five days a week because it regulates your blood pressure and your heart condition. It’s not like that. This is more like: the more people are microdosing over time, the less they need it. …When I’m coaching people or working with clients, the goal is to eventually not microdose.”

Doubleblindmag.com: “How to Microdose” class

The Broken Spears: The Aztec Account of the Conquest of Mexico, by Miguel Leon-Portilla

The Sacred Mushroom and The Cross, by John M. Allegro

The Psychedelic Gospels: The Secret History of Hallucinogens in Christianity, by Jerry B. Brown, Ph.D., and Julie M. Brown, MA

The Immortality Key: The Secret History of the Religion with No Name, by Brian C. Muraresku

Secret Drugs of Buddhism: Psychedelic Sacraments and the Origins of the Vajrayana, by Mike Crowley

Link.springer.com: Effects of psilocybin on hippocampal neurogenesis and extinction of trace fear conditioning

Adam Bramlage is Founder/CEO of Flow State Micro, a functional mushroom company and microdosing educational platform focusing on harm reduction and best practices. Bramlage works one-on-one with clients to optimize their microdosing experience. He’s helped hundreds of people, from professional athletes to people suffering from addiction and depression, achieve incredible results through microdosing. Bramlage works closely with psychedelic researcher, pioneer and father of modern microdosing, Dr. James Fadiman. In collaboration with Doubleblind Magazine, Bramlage launched his 14 episode online course “How to Microdose,” which was recently featured in Forbes Magazine as one of the masterclasses of psychedelics, and received an award from Gear Report for Top Ten Wellness Products of 2021. In collaboration with the SF Psychedelic Society, he has recently released his online Microdosing Movement Masterclass, looking at our ancestral and potential evolutionary use of microdosing. He is co-founder of the Microdosing Support Network, the first free online monthly microdosing support group. Prior to his work with mushrooms, he spent more than a decade in the Prop 215 and Prop 64 California cannabis space as a farmer, distributor, and manufacturer. He hopes psychedelics does NOT go the same route as legal cannabis.