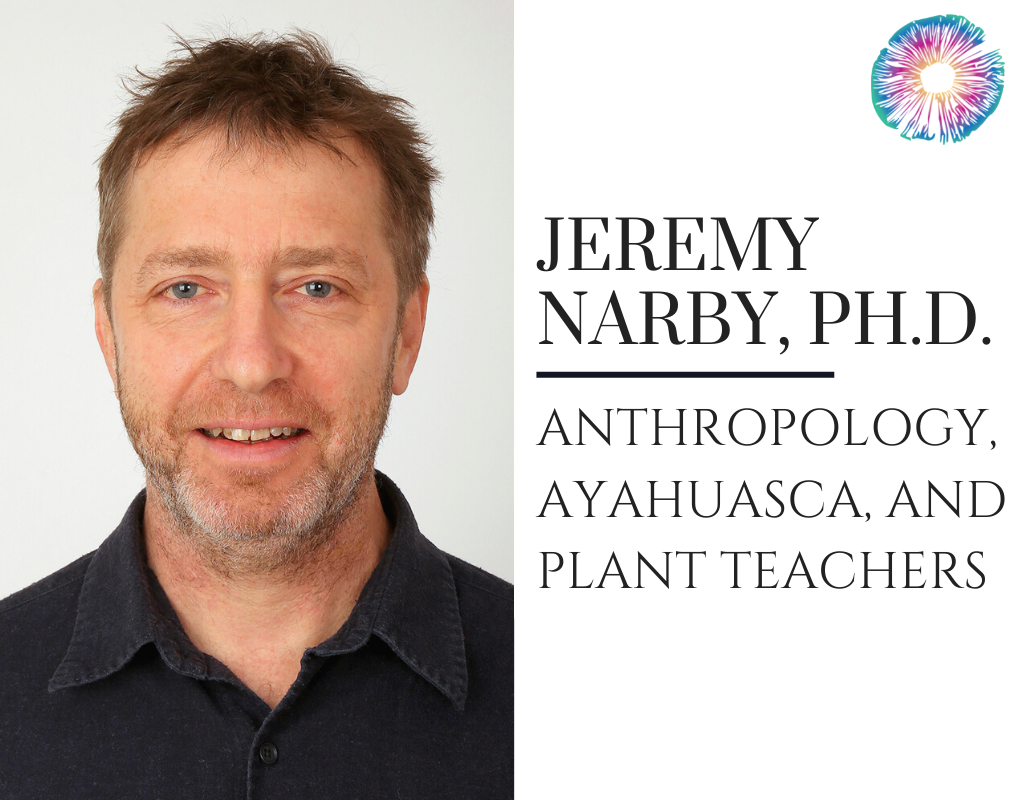 In this episode, Joe and Kyle sit down with famed anthropologist and author (most notably of The Cosmic Serpent), Jeremy Narby. He is also the Amazonian projects director for Nouvelle Planète, a nonprofit organization that works to empower Indigenous peoples through demarcation of land.

Narby talks about how he was pushed to psychedelics through a combination of long talks with Humphry Osmond and political anthropology, focusing on the conflict between the World Bank and Indigenous people over their land. He tells how his first ayahuasca and datura experiences made him feel reconciled with nature, and how he realized people in the states had started speaking highly of the ecological knowledge of Indigenous people of the Amazon without ever talking about the hallucinogenic way they attained that knowledge (and how he felt it was his place to start talking about it).

He also discusses anthropology and subjectivity; Richard Evans Schultes; the problem with trying to verify or substantiate hallucinations; the West’s focus on “the active ingredient” and how ayahuasca is much more than drinkable DMT; the overuse and microdosing of ayahuasca; the entourage effect and how it’s excluded by the “DMT explains everything” hypothesis; why vine-only ayahuasca needs to be researched more; and the differences in how people react to LSD vs. ayahuasca or psilocybin (do the plant substances have a trickster spirit in them which doesn’t like some people?).

To win a copy of Narby’s most recent book, Plant Teachers: Ayahuasca, Tobacco, and the Pursuit of Knowledge (co-authored by Rafael Chanchari Pizuri), click here!

“When I first started hearing this at the age of 25 (in 1985), I thought it was a bit of a joke because I didn’t think that one could take psychedelics and learn about plant properties. I thought one could take LSD and have an interesting time in the woods with one’s friends, but if you really started thinking that the trees were talking to you, there was a bit of a problem. That was my point of view at the time. But here were these rainforest Indians living in the most biodiverse place on earth saying: Yes, we learn about plant properties by drinking this hallucinogenic vine mixture.”

“If you’re an average Westerner; without really even realizing it, you kind of subscribe to this idea of The Active Ingredient. So you know what is the active ingredient of ayahuasca? Ah, it’s DMT. This is the scientific opinion that has been turned into a kind of orthodoxy, but just talk to the Indigenous Amazonian people. They’ll tell you that the vine itself, which doesn’t contain DMT, is the main ingredient.”

“Just the ayahuasca vine itself; if you make an extract from it, you already have a complex cocktail. And then that mixture is used to study all the other plants. And so, it’s a cocktail to which you can add tobacco and nicotine, datura and scopolamine, coca and cocaine — you can add any plant you want to study the effect of the plant. That’s what ayahuasca also is. So, it’s, at its base, a cocktail, and then it can be turned into a psychoactive cocktail with many different plants, including DMT. …It’s Cocktail City, basically.”

Win a copy of Plant Teachers…

The Cosmic Serpent: DNA and the Origins of Knowledge, by Jeremy Narby

The Teachings of Don Juan: A Yaqui Way of Knowledge, by Carlos Castaneda

Jeremy Narby, PhD, is co-author of Plant Teachers: Ayahuasca, Tobacco, and the Pursuit of Knowledge with indigenous elder Rafael Chanchari Pizuri. He became an early pioneer of ayahuasca research while living with the Asháninka people of the Peruvian Amazon in the 1980s. He studied anthropology at Stanford University and now lives in Switzerland and works as Amazonian Projects Director for Nouvelle Planète, a nonprofit organization that promotes the economic and cultural empowerment of Indigenous peoples.