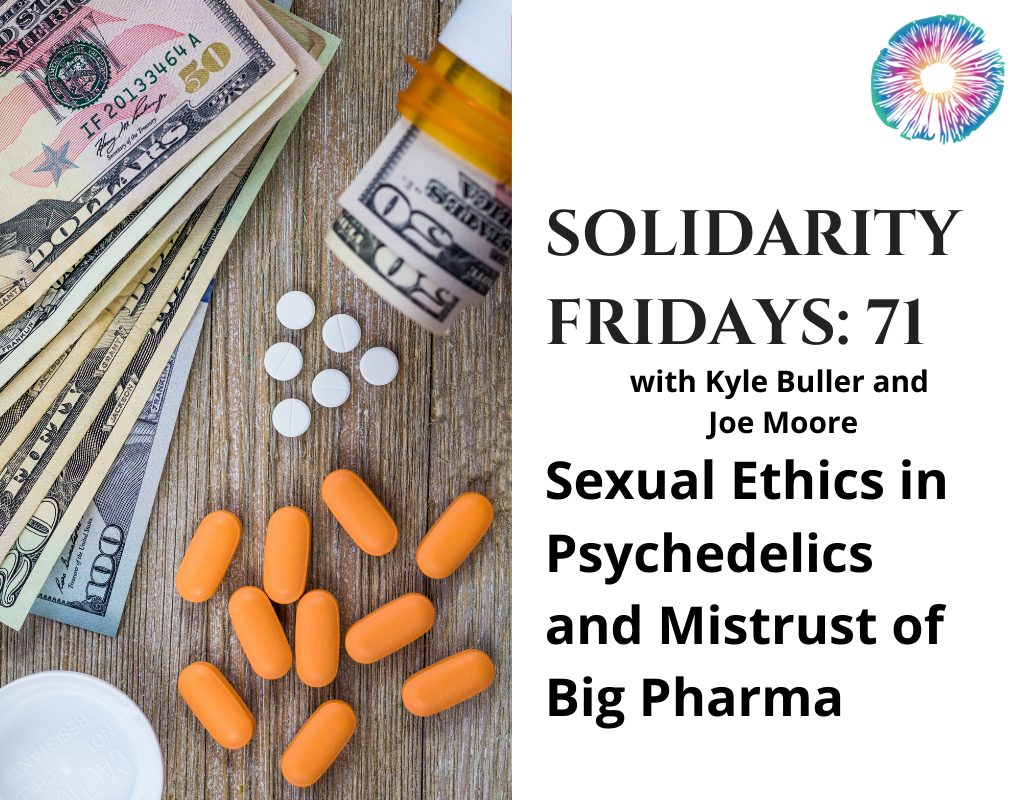 In this week’s Solidarity Fridays episode, we’re back to the original team of Joe and Kyle, who start with some good PT news: the successful launch of our first Australian edition of Navigating Psychedelics, a “partnership of sorts” with Fruiting Bodies Collective, and a few teases of more big things to come…

They first discuss psychedelic research company, Numinus, being granted approval by Health Canada (essentially Canada’s FDA) to study MDMA-assisted therapy, and later discuss Michael Pollan’s newest book, This Is Your Mind On Plants and his previous works. And they report on the launch of The Psychae Institute, a $40m psychedelic medicine institute in Melbourne that will be studying MDMA and likely DMT (which would somehow only be the second study?!).

But most of this episode centers around two topics that keep coming up. First, sexual ethics and power dynamics within the facilitator-experiencer relationship: When is touch ok? What’s the real purpose behind it? Is the facilitator aware of what their actions could be doing? Can you trust them? How do you fully establish consent, and how do you trust someone’s consent when they’re in a non-ordinary state? Is it possible to have a psychedelic session without sexual energy coming up? And when is it ok for a facilitator and experiencer to have a relationship?

And the second big conversation is a classic, but pondered from a slightly different angle: Why do we mistrust big corporations and big pharma so much, when many of us can thank them for saving our lives? And this leads down many roads: Peter Thiel, Fauci, SB-519 possession limits, the social contract, and why lying is sometimes necessary.

“The question is, if you are in that position of power: What’s your intention for touching or doing any sort of bodywork? Do you feel that it would be beneficial, or is the person actually asking for it?” -Kyle

“[A friend asked me:] Is it possible to have a psychedelic session without sexual energy coming up? And I think his point was no, you can’t, and it’s kind of just something that you have to deal with. And are you mature enough to be able to have that restraint in sessions? A lot of people aren’t. I’ve certainly felt plenty of that. Breathwork, psychedelic sessions, festivals, concerts, the works. It’s everywhere. As soon as people are amplified, sexuality’s amplified and it can throw a big wrench in things.” -Joe

“What does the FDA tell us we should eat? What does science in 2021 tell us we should eat? What are doctors telling their patients [about] how to eat? Is it based on industry-manipulated science from 20, 30, 40 years ago? Or is it based on 2021 data? When doctors are suggesting a Mediterranean diet, that’s based on data. When they’re suggesting FDA-approved food pyramid stuff, that’s just an industry scam, and that’s pretty well documented. These are problems. When your profession has been manipulated more than once by industry, there’s going to be a reason why people don’t want to believe you.” -Joe

“What is the agenda here with some of these companies? Do they just want to come in and make billions of dollars and they don’t give two shits about us? It’s all about the money? Or, are some of these companies actually really wanting to help and it just takes a massive amount of capital to do research and to produce these molecules and medicines to get out to the public and to create the systems that we need to properly support people moving forward?” -Kyle

This Is Your Mind on Plants, by Michael Pollan

Zero to One: Notes on Startups, or How to Build the Future, by Peter Thiel