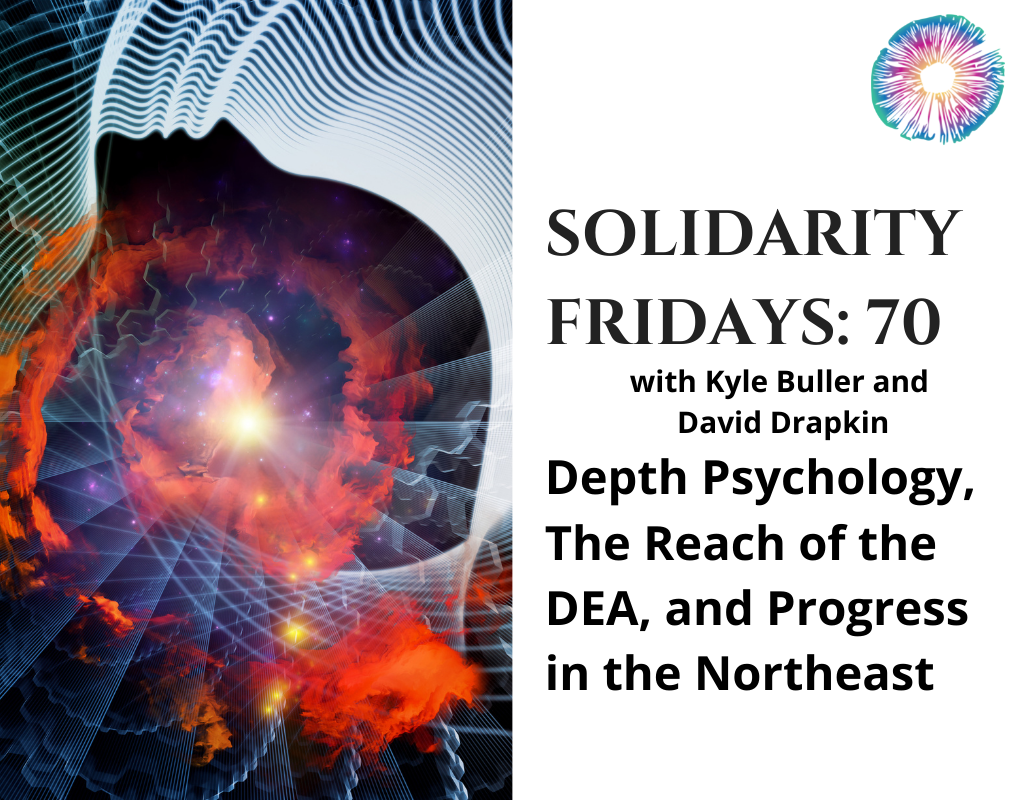 In this week’s Solidarity Fridays episode, it’s a crew of two again, but this week, it’s the “Jersey Boys”:  Kyle and David.

They first have an in-depth conversation about depth psychology (yes, I meant to do that), discussing James Hillman, the idea of soul existing in everything, the different ways one can connect more with their mind, the difference between dark and golden shadows, and how psychiatry is thankfully moving more towards an emotional-based, transdisciplinary model. And they ask some great questions: How could science explain synchronicity? How does one interact with an archetype? How do you measure the soul? When you hear a song and are instantly taken back to a memory and feeling (and even a smell) from the past: How on earth do you measure that?

They then discuss the DEA and its reach: What should the DEA’s power and focus be and how does it relate to both the Right to Try Act, seen through attorney Kathryn L. Tucker and two patients requesting end-of-life psilocybin, and in the DEA’s denial of Soul Quest’s religious freedom exemption application? In an era when classic, mainstream religion is slowly being replaced by more freeform spirituality, what authority does the DEA have to decide what is religious or not, and why do they still use their antiquated exemption policy?

And they also discuss more progress in law, particularly in the Northeast: Massachusetts lawmakers discussing a bill to create a psychedelic legalization task force (that will also look at pardons for past convictions), and Pennsylvania working on legislation to authorize the clinical study of psilocybin, with a focus on something which massive corporations and the DEA pay very little attention: cost-benefit optimization.

“I love that you’re using the word ‘love’ as an important emotional energy to give to those dark parts of our shadow, hopefully to transform it into a more golden shade of our shadow. Because we’ve become so starved of love inside and we have, I think, just so much blame and stuckness from our past.” -David

“It’s great that we’re bringing attention, because it does kind of act as a catalyst. I think we’ve spoken about Right to Try, we’ve spoken about religious liberty, we’re speaking here about state-level and DEA and FDA- each of these [are] different pathways of changing the law and of giving accessibility. There’s going to be a range of options when it actually does settle down, and it’s great that there’s just more and more of this happening. …We’re seeing this really overwhelming, powerful message that this has to happen soon and that it will happen soon.” -David

Psychedelics Today: What Is Depth Psychology and How Does It Relate to Psychedelics?

Psychedelics Today: Psychedelics, Religion, and the DEA’s Quest for Soul

Npr.org: After 50 Years, U.S. Opens The Door To More Cannabis Crops For Scientists

The Celestine Prophecy, by James Redfield

The Secret, by Rhonda Byrne

Iron John: A Book about Men, by Robert Bly

Women Who Run with the Wolves: Myths and Stories of the Wild Woman Archetype, by Clarissa Pinkola Estés