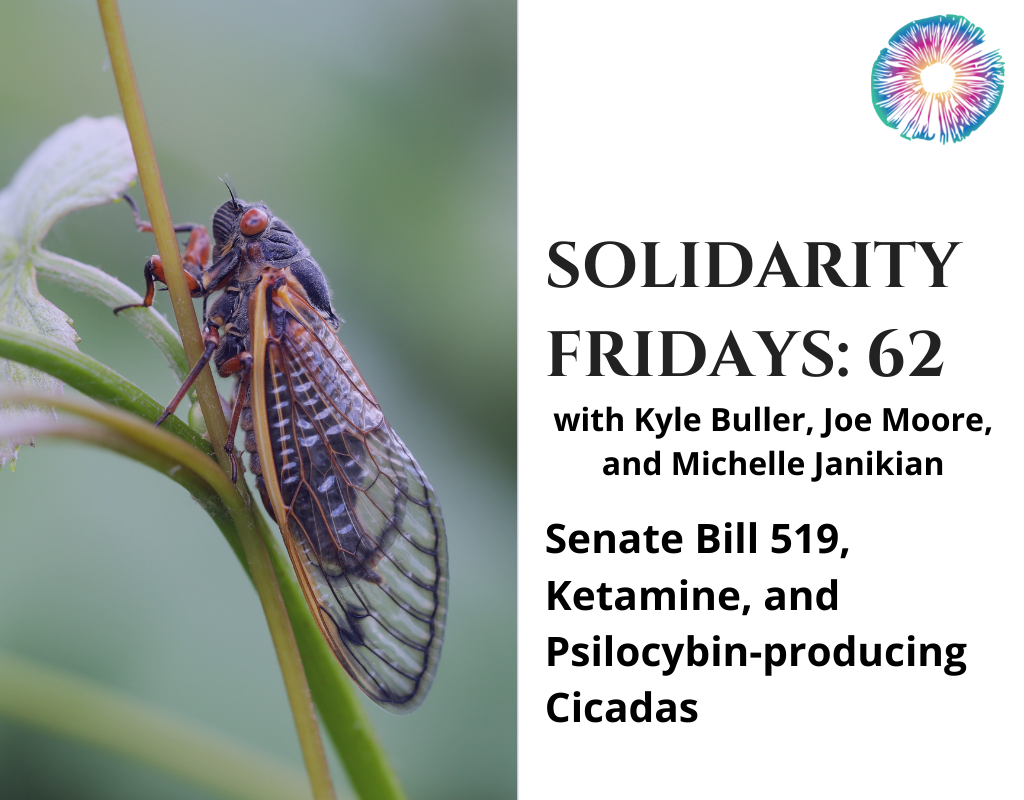 In this week’s Solidarity Friday episode, Joe, Michelle, and Kyle reconvene to talk about the biggest (and one of the weirdest) news stories.

In this week’s Solidarity Friday episode, Joe, Michelle, and Kyle reconvene to talk about the biggest (and one of the weirdest) news stories.

They first discuss the California Senate passing Senate Bill 519, which, if enacted into law, would be the first state-wide decriminalization bill, removing criminal penalties for possession (and sharing) of psilocybin, ibogaine, LSD, and MDMA for adults. They talk about what the emerging market could look like, why harm reduction tips aren’t typically on cannabis packaging, and an interesting poll that showed that 35% of Americans now believe in the therapeutic potential of psilocybin (most surprisingly illustrated by a former sheriff in Florida publically stating his support).

They then discuss the recent news of the federal government ending a 50-year contract with the National Institute on Drug Abuse (NIDA) that only allowed researchers to use cannabis from one approved facility (and the absurdity of this roadblock impeding research into such a commonly-used drug for so long), a New York Times opinion piece on the life-saving potential of ketamine and all the unmentioned variables that can affect its efficacy, and last but certainly not least: An article about cicadas being infected and zombified into decomposing, sex-crazed maniacs by a fungus that produces cathinone (which we know synthetically as “bath salts”), and even more interestingly, psilocybin. And if you’re thinking it, we feel it must be said that it’s likely not wise to attempt to trip off of discarded cicada butts.

“What’s the point of cicadas spreading a psilocybin-containing fungus all over the East coast right now? It feels a little intentional on nature’s part.” -Michelle

“[There was a] $2.1 billion merger in Florida of two grows recently. How do we square these things? We can do capitalism, but we can’t do research.” -Joe

“All these states legalizing for recreational/medical, and it’s like, as a country and people/society, don’t you want good data around products that you’re selling? And if the research isn’t there, how are we making good decisions? It just seems really counterintuitive that you’re just letting it run wild to some degree, but then also being like, ‘Well, we can’t study this because it’s a Schedule I and we still have to follow all of this.” Like, no wait, people are doing this. Don’t you want good data and [to] keep people safe?” -Kyle

“Are we short-changing humanity in the progress of science by only accepting randomized controlled trials as the gold standard of data? Are there things that are more cost-effective and quicker? Like, let’s test 20 drugs and skip placebos so we have data on 20 drugs, as opposed to like, how much more data do we need on placebo as part of RCTs? While RCTs are amazing, there’s a lot of drugs left to test.” -Joe

“These are articles being published, and so, how honest are we being about our own process, and what actually gets published? I could sit there and present you a really great story about my near-death experience and how it really changed my life and how it motivated me to do all this stuff and my psychedelic experience helped me to process my trauma and I went to school, and I could show you all the highlights, but how many of us are actually showing the trenches of our reality, and the descent into those valleys?” -Kyle

Thehill.com: Poll: 65 percent of voters say psychedelic substances do not have medical use (weird that they went with this headline instead of 35% of people believing the opposite)

Smithsonianmag.com: A Fungus Causes Cicadas to Mate Like Crazy, Even After Their Butts Fall Off

Npr.org: After 50 Years, U.S. Opens The Door To More Cannabis Crops For Scientists

Nytimes.com: Opinion: I Was Paralyzed by Severe Depression. Then Came Ketamine.

The Alchemy of Psychology, by James Hillman