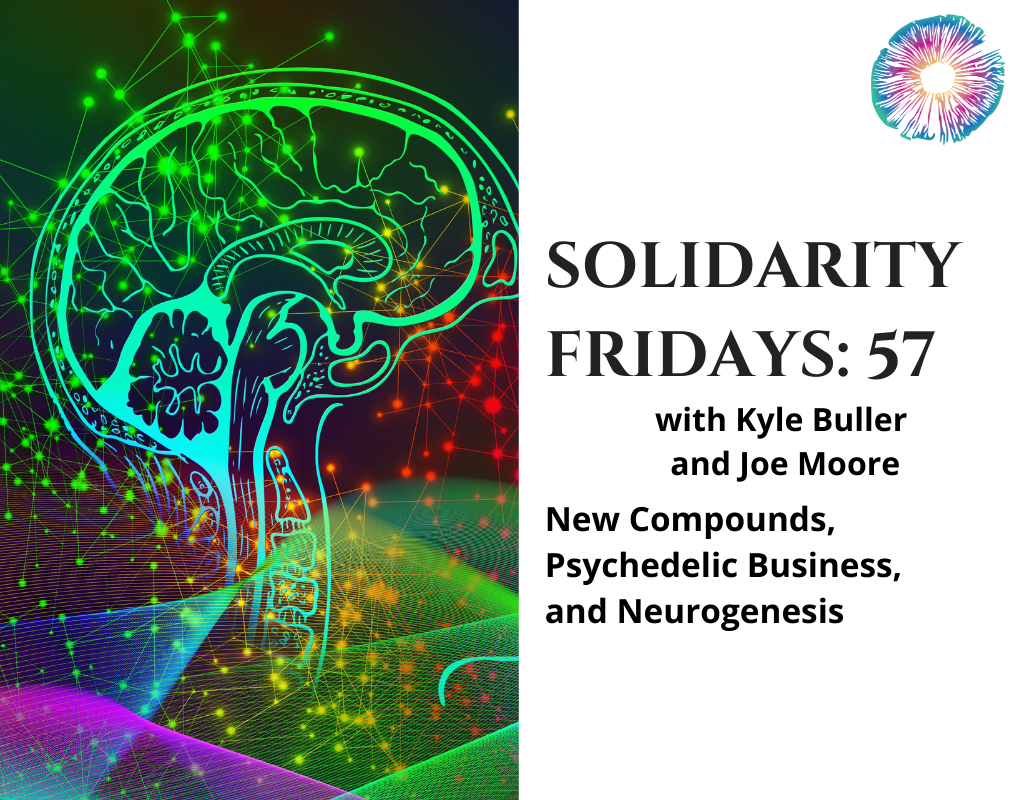 In this week’s Solidarity Fridays episode, a power outage keeps Michelle from joining in, but Joe and Kyle pick up the slack, going old-school SF style for the week.

They talk about new drugs: Cybin investigating using their proprietary psychedelic compound “CYB003” for alcohol use disorder, and scientists using a technology called psychLight to identify when a compound activates the brain’s serotonin 2A receptor (in hopes of activating the biological benefits of psychedelics without their traditional hallucinogenic effects).

They also give a legalization update, with new cannabis and psychedelic reform bills in Texas and legalization bills in Louisiana, talk about non-profit Porta Sophia’s new Psychedelic Prior Art Library and the importance of establishing a public domain, and discuss Johns Hopkins’ new study on psilocybin for Alzheimer’s-related depression (and ways to possibly combat the effects of Alzheimer’s). They also cover climate change, Leonard Pickard, the tragedy of the commons, 2C-B, the importance of looking at fringe cases, and the intelligence of millennials.

“How could we shift to more cooperative actions vs. competition all the time?” -Kyle

“Our map of reality is minimized inappropriately when we exclude these fringe cases. …What does it mean that somebody can present as psychic, or present as a spirit, or meet these spirits, or go to the [afterlife] and come back (in your case) and then get set on an interesting trajectory via psychedelics? This is not what doctors can deal with, but this is what those of us outside of medicine can deal with, as a philosophical endeavor.” -Joe

“Some of these new compounds- I guess it’s exciting, and you always say we need new drugs, but …why is there a race for new drugs when we’re not even using the ones to the full potential that are not even on the market right now? ..Just thinking about all the new companies coming online trying to find new drugs for patents and development, when it’s like, have we really explored the potential of the ones that have been around for a while?” -Kyle

Reversing Alzheimer’s: How to Prevent Dementia and Revitalize Your Brain, by Timothy J. Smith, MD

Nypost.com: Ayahuasca tea could be a breakthrough treatment for Alzheimer’s

Wikipedia.org: Tragedy of the commons

The Rose Of Paracelsus: On Secrets & Sacraments, by William Leonard Pickard

Scitechdaily.com: Scientists Discover a Psychedelic-Like Drug Without the Hallucinogenic Side Effects