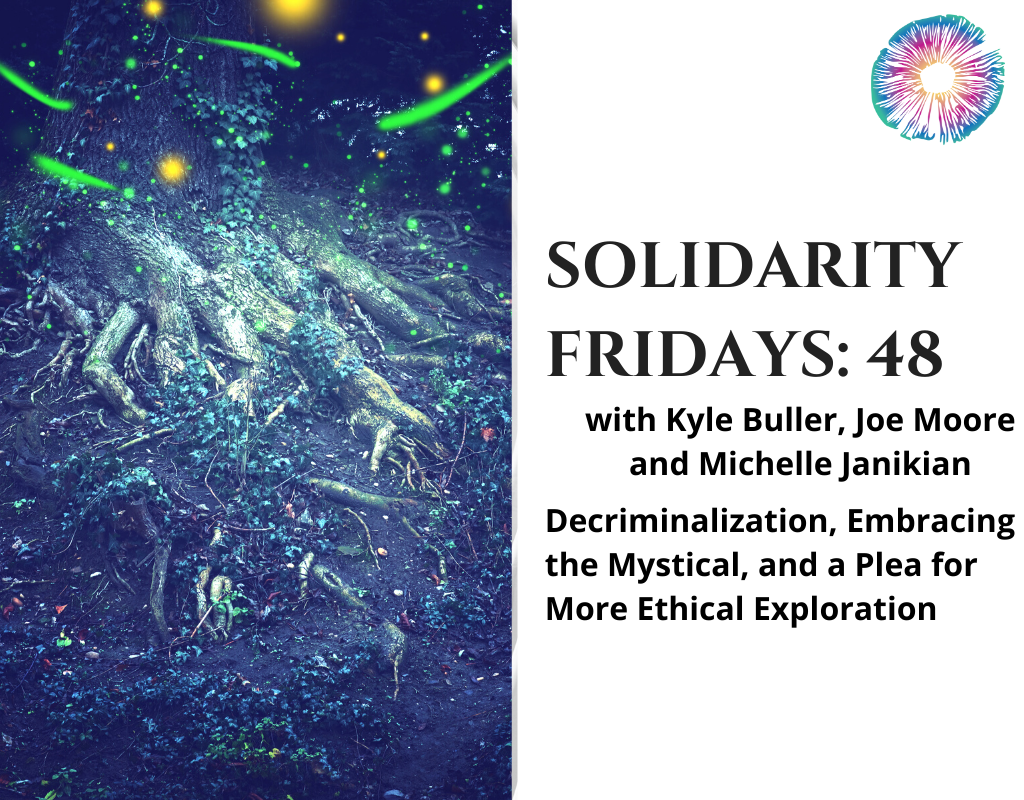 PTSF48 – Decriminalization, Embracing the Mystical, and a Plea for More Ethical Exploration

In today’s Solidarity Fridays episode, Kyle and Joe are joined once again from Mexico by Michelle Janikian, and let’s take a moment to do what wasn’t done last week: welcome Michelle to the podcast, as she will be joining the guys on SFs for the foreseeable future, and possibly on other podcasts soon as well. Welcome to the revolution, Michelle!

In today’s Solidarity Fridays episode, Kyle and Joe are joined once again from Mexico by Michelle Janikian, and let’s take a moment to do what wasn’t done last week: welcome Michelle to the podcast, as she will be joining the guys on SFs for the foreseeable future, and possibly on other podcasts soon as well. Welcome to the revolution, Michelle!

As you’d expect, they discuss the news: Norway’s plan to decriminalize personal drug use based on recommendations from the U.N. and W.H.O. and why that may be related to Norway’s high rate of drug-related deaths (or maybe even a high suicide rate), a new bill in California to not only decriminalize psychedelics (including MDMA and LSD, and excluding peyote) but expunge records as well, a new Massachusetts bill to decriminalize all drugs and study psychedelics, a study where researchers achieved real-time communication with lucid dreamers, and Alex Jones’ (likely true) claim that government officials regularly use DMT to communicate with freaking aliens.

The most-discussed articles though, are Vice’s post about how psychedelic therapy needs to embrace the mystical side of things, and Tim Ferriss’ recent blog, pleading people to follow more ethical, safer, and more environmentally-friendly paths in their explorations of different medicines. They also talk about Ferriss’ concept of a minimum effective dose, the progress of cannabis legalization in Mexico, using caution with frameworks, Pascal’s Wager, how the idea of a psychedelic community is becoming antiquated, and whether or not Kyle is regularly astral projecting without realizing it.

“This concept of political capital- you only have so many ‘politics tokens’ to put in the machine, and being a politician, you kind of have to play the game of not only influencing what you and your constituency want but [also] ‘how do I get re-elected too?’ It’s not spending political capital to be anti-drug in most states. [To] be a really hardcore prohibitionist, you actually gain political capital in a lot of ways. But putting your neck on the line for something like this is quite risky for a politician, so, good on ya!” -Joe

“It just doesn’t fit into that narrative where it’s like: ‘Can psychedelics revolutionize mental health?’ Yes, but not just help people and cure, heal- we have to change the way we think about the human experience and we have to let in so many other weird, unworldly experiences to really, fully– like, yea, it’s going to revolutionize mental health. It’s going to revolutionize everything if we really integrate it and take all aspects of it into consideration. But that’s really hard for doctors and these psychiatrists in-training to really do- they just want a new medication to help their patients. Do they really want to like, rethink reality? [sarcastically:] That’s just for weirdos like us.” -Michelle

“Sometimes when I’m in conversations with other clinicians and it’s so pathology-oriented, I’m like, do we need to keep continuing that language? Could there be other ways of viewing and seeing this? How [can] psychedelics- or not even psychedelics- just extraordinary experiences in general help shift our view of what it means to be human? What does it mean to be well in the world? Do I always need to be sick when I come to a mental health professional? Do I always need some sort of diagnosis? I think these are the questions that my exceptional experiences have made me think about- traditional systems and how they’ve really shifted over the years.” -Kyle

“The dream world, to me, has always been so fascinating, because it’s like the natural psychedelic everyone has every night. Dreams are so weird. There’s no psychedelic that really touches how weird dreams are. And yet we go to that place every night.” -Michelle

Bloomberg.com: Norway to Decriminalize Personal Drug Use in ‘Historic’ Shift

Tim Ferriss’ blog: An Urgent Plea to Users of Psychedelics: Let’s Consider a More Ethical Menu of Plants and Compounds

Academia.edu: DMT Research From 1956 to the End of Time, by Andrew R. Gallimore and David P. Luke

Psychologyconcepts.com: The Fallacy of Misplaced Concreteness (Kyle was right, Joe had it wrong)

Cell.com: Real-time dialogue between experimenters and dreamers during REM sleep (the actual study)