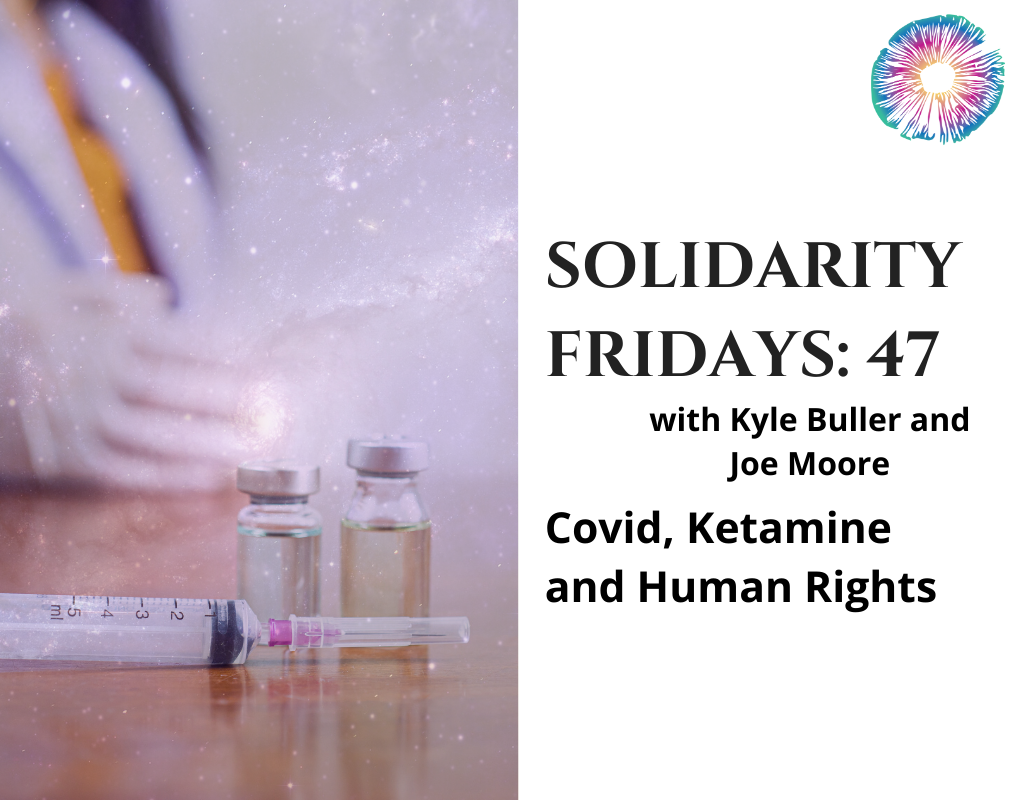 In today’s Solidarity Fridays episode, Kyle and Joe are joined from Mexico by freelance journalist (who has been featured here several times) and writer of Your Psilocybin Mushroom Companion, Michelle Janikian. They first get into an email from a listener in Costa Rica highlighting a problem Michelle has seen in Mexico (and that mirrors last week’s discussion about ayahuasca gatherings): expats’ disregard for Covid safety protocols showing an egotistical disrespect for the communities that have welcomed them.

The episode then shifts to a bit of a callback to the early days of solidarity, with fewer philosophical ponderings and a whole lot of articles (just scroll down to view the wall of links). From ketamine reducing suicidality (and is ketamine a cure-all silver bullet or just an overhyped respite?) to a Rick Strassman-backed study of DMT for stroke patients, to a college in Jamaica opening a Field-Trip backed psilocybin lab, to Vermont and New Jersey’s progress on decriminalization bills, to a discussion on if drug laws violate human rights, to extremely mainstream Vogue and Rolling Stone both reporting on psychedelics, this episode has it all. And yes, it does also include anti-government and drug war rants from Joe, so it’s truly a complete episode.

And if you forgot, the next round of Navigating Psychedelics for Clinicians and Therapists goes live on 3/11!

“If we are at home working with psychedelics because we can’t do group work, I think it’s still really important to be talking about it with other like-minded folks, because when we don’t have any community and we just are using psychedelics, it can get a little delusional. …We can still take psychedelics, but we have to live in reality.” -Michelle

“Everybody’s saying psychedelic integration is important [and it] makes me roll my eyes. Like, yea, true, but how many times do we have to say it? I guess ‘until everyone’s doing it’ is the answer.” -Joe

“A lot of my anxiety and depression stems from an existential, spiritual root, and a lot of my experiences with breathwork or psychedelics in the past would get me there and provide that deep level of insight of: ‘I have a choice here.’ And it allowed me to change my relationship (or at least provide insight on how I could change my relationship to that), but then coming back to do the work was the challenge. Like, ‘Oh shit, I need to actually change this. And how do I do that?’” -Kyle

“Ok, Federal government: what can you do to win my trust back? And I don’t know what the answer is, honestly. I don’t think I will, at large, ever really trust the US Federal government. I don’t really hold out hope that I’ll trust them again in my lifetime because they’ve shown to be a corrupt, gross, crony, capitalist system that does not care about human well-being.” -Joe (big shock)

This Week in Virology podcast

Esperanzamazateca.com: Donate to help the people of Huautla de Jimenez

Notion.so: Contemplating the complexities of being in relationship with substances

Iflscience.com: Psychedelic Drug DMT To Be Trialed On Stroke Victims

Playboy.com: Can Microdosing Make You a Better Athlete?

Vogue.com: Could the Embrace of Psychedelics Lead to a Mental-Health Revolution?

Rollingstone.com: Will the Federal Government Finally Embrace the Psychedelic Revolution?