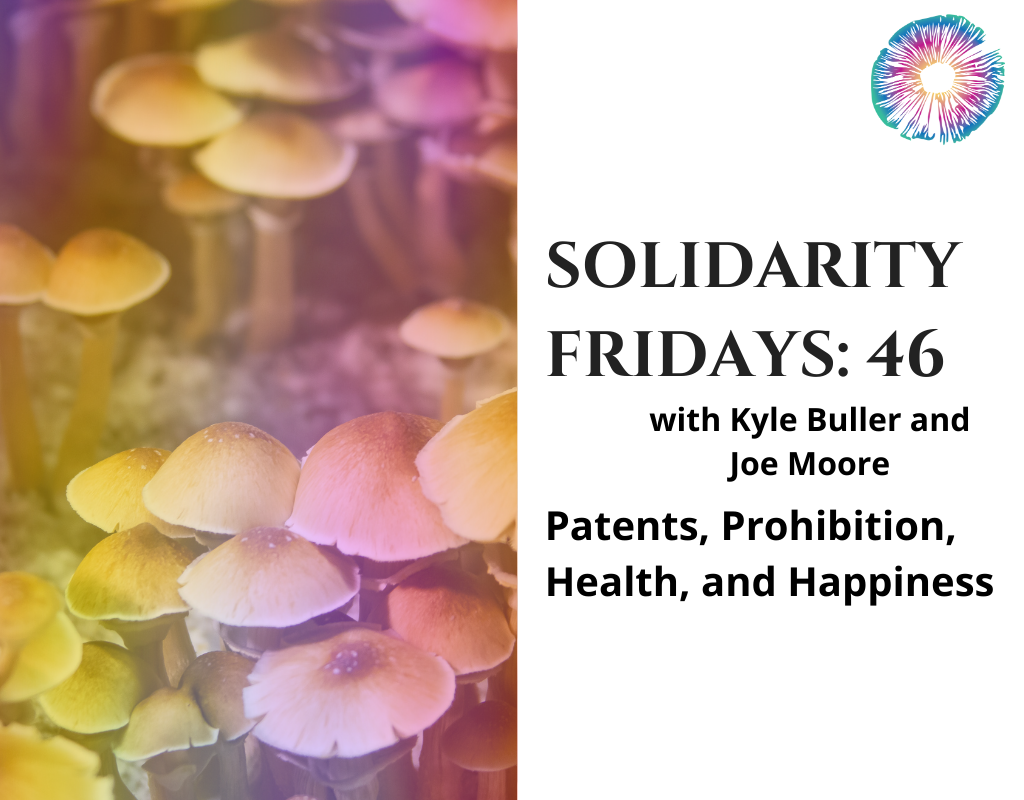 In today’s Solidarity Fridays episode, Kyle and Joe cover several news stories, including the University of Wisconsin-Madison creating a Psychoactive Pharmaceutical Investigation masters program, a non-profit called the Healing Advocacy Fund being created to implement therapeutic-use psilocybin in Oregon, legislature in Hawaii filing a new bill to legalize therapeutic-use psilocybin and psilocin (and remove them from their Schedule I controlled substances list), Cambridge, Massachusetts joining its neighbor, Somerville, in decriminalizing entheogenic plants, and the biggest story: Compass Pathways attempting to patent such common aspects of psilocybin-assisted therapy as soft furniture, muted colors, and providing “reassuring physical contact.” This leads to a discussion on patents and what companies are really trying to do with this behavior.

They then discuss why mescaline isn’t researched more, why psychedelic exceptionalism is a problem, Dr. Carl Hart, The Weeknd, and one of everyone’s favorite topics: the drug war and why it sucks.

And they let us know that seats for the next round of Navigating Psychedelics for Clinicians and Therapists (beginning March 11th) are about half full (so sign up!), the panel discussion on “Light Years” with director Colin Thompson is happening tonight (so hurry up and register for it!), and Mind Bending, Mind Mending – A Series Exploring How Psychedelics Affect the Brain premieres on February 22nd with the first edition on Ketamine and featuring Kyle and Dr. Melanie Blair Pincus.

“Are we in a little bit of a fantasy land when we’re trying to separate ourselves from the rest of drug culture? Big portions of psychedelic culture overlap with other portions of other drug cultures. And we’re not mutually exclusive. We’re prosecuted and surveilled by the same government agencies. Prohibition hits us all really hard.” -Joe

“I think that’s how a lot of politicians win votes, is by being ‘tough on drugs’ when we should be tough on the drug war.” -Joe

“What does it really cost to end the drug war? What do we save by ending the drug war? It’s probably actually better for culture to end the drug war than to medicalize psychedelics. It’s going to be cheaper, we’re going to have a lot of our citizenry back, we’re going to have less felons, …much less racist culture, all of that. I know this is Psychedelics Today and once in a while, I feel like I’m going, “This is Drug War Today!’ but this is just a thing that keeps coming back to me, and I think it’s important that we examine our cultural baggage around our traditions. Should we really be demonizing people who use PCP? I don’t think so.” -Joe

Vice.com: Can a Company Patent the Basic Components of Psychedelic Therapy?

Psychedelicstoday.com: End of the Road – Navigating Psychedelics and Patent Law

Chasing the Scream: The First and Last Days of the War on Drugs, by Johann Hari