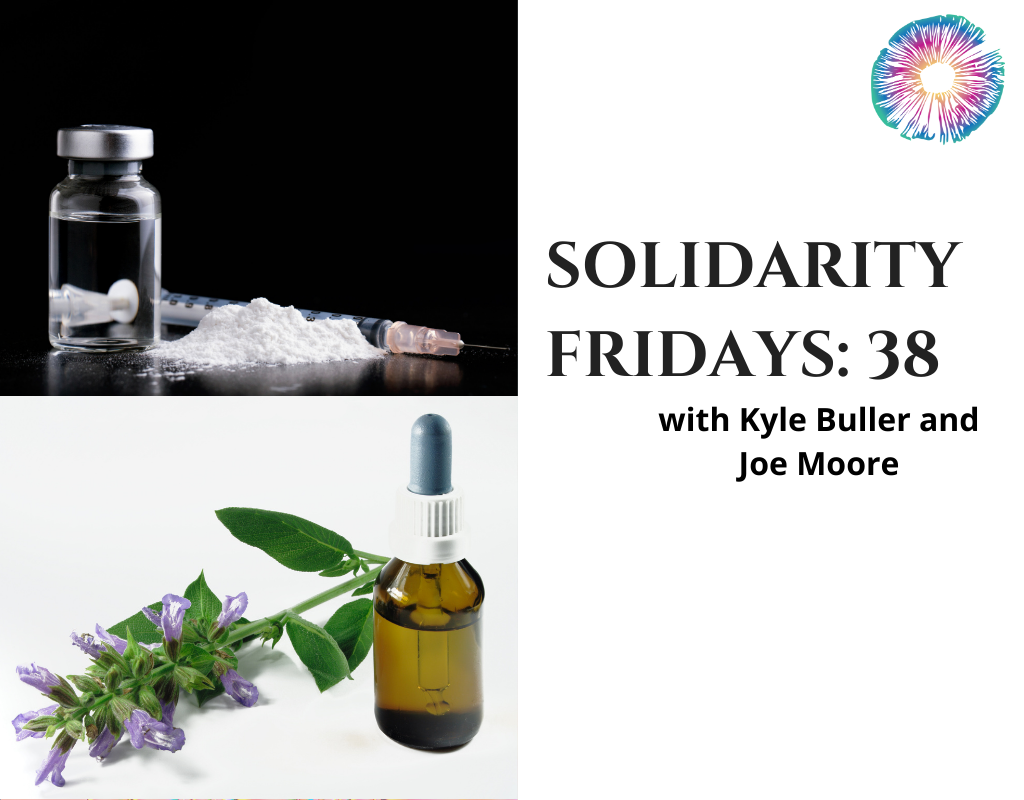 In today’s Solidarity Fridays episode, Kyle and Joe talk about what they’ve been up to in the last few weeks: doing drugs!

Kyle first tells us about his recent experiments with revisiting salvia (which is legal in his state) and how different the experiences were from his young-and-dumb experiments as a teenager- how smaller doses in more ceremonial settings with years of experience in breathwork-inspired non-ordinary states of consciousness helped him see salvia differently. He talks about feeling like he just met the spirit of salvia, and the first message was to “respect the plants.” He may be seeing her again.

And Joe talks in-depth about his experience last Friday with his first intramuscular ketamine injection- the setting, the music (Sigur Rós- good call, Joe), the dose and timing, and what he heard and felt (and didn’t) in his ultimately anxiety-relieving, body-dissolving time in an empty void. Like Kyle, he’s now even more open to and supportive of ketamine after the experience.

And they also talk about a new ibogaine analog that was recently created called tabernanthalog (or TBG), of which a single injection helped against heroin use relapse in mice for 14 days and doesn’t stimulate the brain’s reward centers. And they talk about the good that could come from the drug-designing technique used to create it, called function-oriented synthesis.

“Some people tell me they like 1.2 mg/kg. Some people even like to go as high as 2. I think 2 mg/kg is essentially like, they could harvest all your organs and you wouldn’t notice one bit. Based on how high and dissociated I was, they probably could have done it to me- if they made it quick, like 5 minutes. I probably would have been fine.” -Joe

“The way I always framed it before going in was: this is an experience of consciousness without identity, without ego, without anything, really. And I didn’t really feel like there was anything there that was me. The idea of ‘Joe’ felt like a weird thing, a weird silly thing. There was just, like, I and ego and one consciousness, so it wasn’t like a Hindu, bliss consciousness thing; it was like me, as an entity, experiencing… something. Like empty void.” -Joe

“This experience was really just fascinating, like how rapidly my consciousness changed. It wasn’t a hurried, frenetic thing like DMT. It was like, “Oh, nope. You’re just here. You’re chilling. You’re not going anywhere.” -Joe

“The MAPs protocol is going to be very expensive. Psychedelic Therapy is already very expensive. So, if we could have a drug that would be safe for somebody to take at home, alone, I think of course we should do that. Not everything is cured through the psychedelic experience. Though a lot of things can be, it’s not the case that everything needs to be.” -Joe

Wikipedia: Legal status of Salvia divinorum in the United States

Sciencemag.org: Chemists re-engineer a psychedelic to treat depression and addiction in rodents