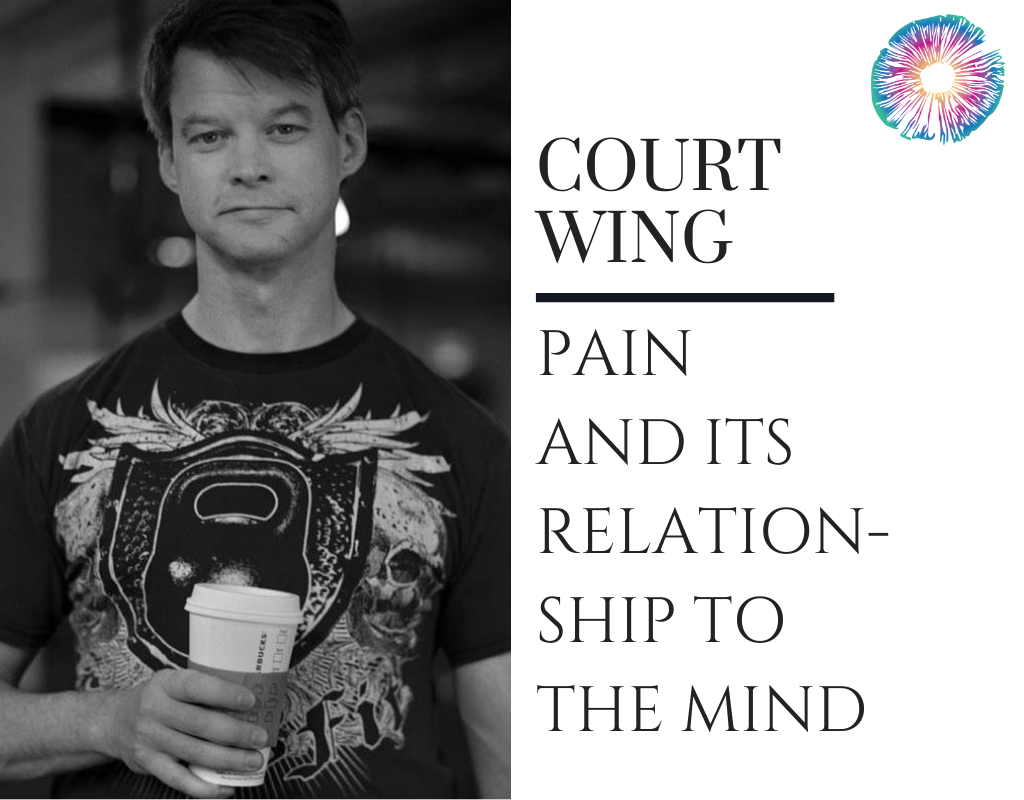 Wing was a recent participant of a psilocybin trial in NYC, studying the effects of psilocybin on (mostly treatment-resistant) major depressive disorder. He talks about his struggles with depression and how reading studies about changes in neuroplasticity and neurogenesis made him wonder if his depression could be alleviated, the measures taken and process surrounding the trials, the concerns over receiving a placebo or the psilocybin not working, and post-trial; the amazing transformation he’s gone through and the power of his experience, psilocybin, and intention-setting.

They talk a lot about pain and the ways pain is related to the mind: the concept that depression may be a nociceptive pain, how common back pain may often be somatosensory pain based on emotional trauma creating a neurological link (similar to Grof’s COEX system), and the Ki-Aikido phrase: “Your mind is the body made subtle. The body is unrefined mind.” How much of pain is emotional, and how much is the body trying to communicate to the mind that a change needs to be made?

“I can see, going in now, the difference that intention makes in what you’re seeking from the session. It’s just astonishing that it’s responsive to intent. …It’s so mindblowing because you’re not just taking this passively.”

“The contrast from before to after made me want to go back and upgrade my scores in those depression assessments because I had no idea how bad it was until it was gone. And it was in less than 8 hours. …We did a little intention-setting ceremony, and I did a little Shinto type of prayer thing- [an] incantation that I’ve always done since I left Aikido, and they gave it to me and put in this chalice, and I looked down at it, and honestly, I was praying to God or my higher power or the universe (however you want to phrase it). I looked at it and said, ‘I really hope that’s you.’ And it was.”

“I had been in recovery from a profound drinking problem for over 17 years, so there’d been significant hesitation on my part to do this, because there’s a lot of cautioning within that framework- you know: ‘there’s no such thing as a chemical solution to a spiritual problem.’ But, what do you do when the chemistry brings you a spiritual experience?”

“A false picture has been painted of what’s possible here. And when it’s only seen in a recreational context where they use some slightly marginalized, perverse catchphrase like ‘hippies’ or ‘dirty hippies’ or something like that, and use that as a way to blame and shame people for seeking relief, and even worse- to claim that the results they’re bringing back are invalid, I think that’s a crime. I honestly do. If I can bring any of my previous experience and reputation to weigh on the scale of the good that can be caused from this, I’m happy to do it.”

Court Wing has been a professional in the performance and rehab space for the last 30 years. Coming from a performing arts background, Court served as a live-in apprentice to the US Chief Instructor for Ki-Aikido for five years, going on to win the gold medal for the International Competitors Division in Japan in 2000 and achieving the rank of 3rd degree black belt.
After a 14 year career in martial arts, he returned to Acting, getting his BFA from the Conservatory of Theatre Arts & Film at Purchase College. At the same time, he was simultaneously pursuing three leading-edge performance certifications. First as an RKC/Strong First kettlebell instructor, eventually going on to be ranked a “Top 10 Instructor” and assisting a closed-course certification of SEAL Team 6 at Virginia Beach. Next he became the first certified CrossFit trainer in NYC, becoming the former co-founder of CrossFit NYC in ’04, New York’s largest and oldest CF gym. His final certification was as a Z-Health Master Trainer, using the latest interventions in applied neuro-physiology for remarkable improvements in pain, performance, and rehabilitation.

He has also served as the principal designer for the UN’s Close Protection fitness assessment and preparation program, and has been featured in the New York Time’s Sunday Routine, Men’s Fitness, and USA Today.

Please visit him online at https://courtwing.com