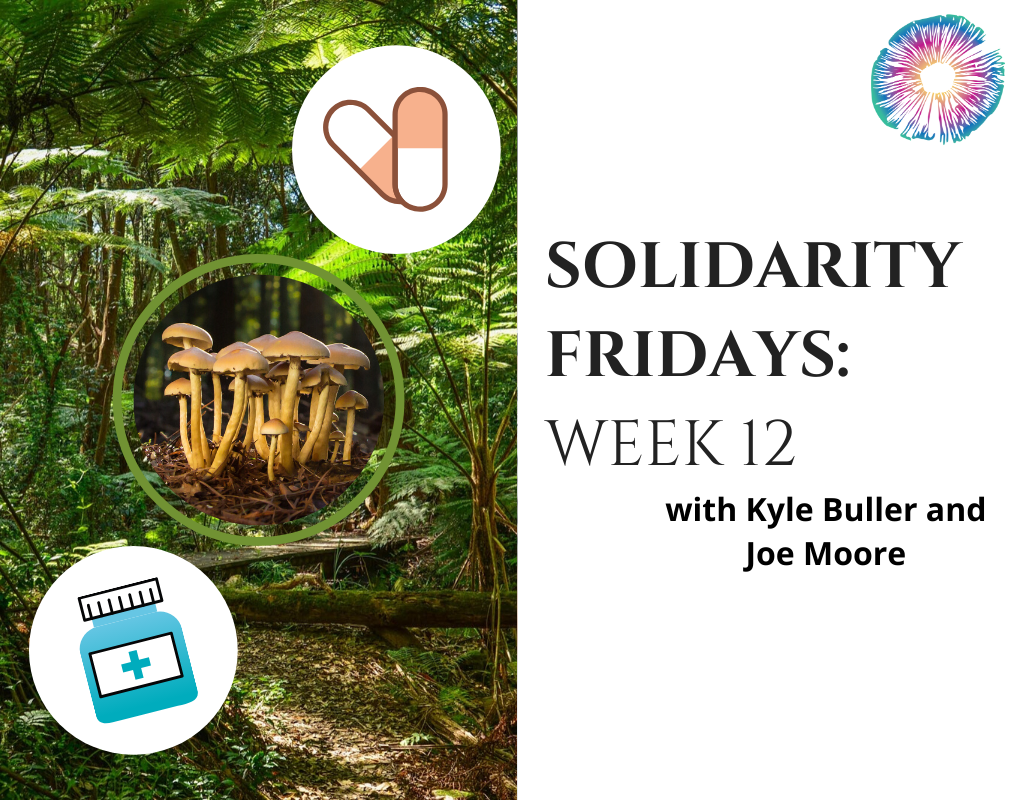 In today’s Solidarity Fridays episode, Joe and Kyle sit down and talk about topics in the news including what psychedelic companies owe to the community (both indigenous people and the underground psychedelic world), psilocybin-like drug alternatives for treating depression and the many reasons newer companies are trying to remove the psychedelic part of the medicine, and Dennis McKenna’s recent appointing to New Wave Holdings’ psychedelic research advisory board and what that says about the current climate of corporations moving into this space.

They discuss the dangers of “sponsored content”-like corporate messages, the malleability of laws and power of lobbyists and interest groups, and how manipulation is faster and quieter than ever before, while many big decisions are being made by people crippled from decades of unseen cultural baggage. And why are companies trying to remove the psychedelic side of medicine? Is it solely for profit, or could it be because there are so many in need that streamlining the process or using these medicines differently than we’re used to in this space would be beneficial to the most people?

Lastly, they talk about the importance of making the right connections and having the right arguments and really asking yourself what you’re trying to do when engaging with those who disagree with you- are you just trying to be right, or are you trying to make a change?

Additionally, Joe shares an important harm reduction story and tip, and gives the news that Psychedelics Today recently surpassed 1 million downloads. Thank you for the support!

“Is the only box you can fit in, like ‘I want a career, a home and a family’? And everything else doesn’t matter? Is that it? I think it’s more complicated than that. We’re not just atomic units, like nuclear families. We’re far more interconnected than that, and it’s kind of irresponsible to ignore that.” -Joe

“Big businesses end up creating these systems that we all seem to rely on over time and to some extent, I think we appreciate the convenience. If that crumbled, what would our life look like? Could we tolerate living more locally, doing things on a much smaller scale? …What would that look like in a world where the government didn’t give huge bailouts to these big companies? Our world would drastically change, and could we shift?” -Kyle

“Maybe a thing to just keep in the back of our minds when we’re hearing all this stuff about new pharma companies is that pharma is not guaranteed money for these people. Pharma is still a gamble. Unless they really nail it, they could go bankrupt in a couple years, or just have earnings way lower than they hoped for. So it’s big money, it’s big bets, and they’re betting on big returns, so they kind of have to go out on a limb and stay stuff like this. But the fact that Forbes put that out- that psilocybin could be toxic- seems irresponsible to me… To me, this kind of looks like sponsored content. Or it’s just like, ‘how do we get these corporations to talk to us and be comfortable, so we have to promise fluff.’ Or, is this organized propaganda?” -Joe

“Some of the people in this space are just getting so nasty that a lot of people are just saying, ‘nah, I’m out, later. I’ll go watch Seinfeld reruns for the next couple years while this shit plays out.’ Are you moving allies away, or are you bringing allies closer to you? Think about that. You want more allies. What’s the best tool? Sweetness. Anger, bitterness, spite- those are things that make people want to go away from you. How effective do you want to be, why do you want to be effective, and what tools are you willing to employ to be effective?” -Joe

What Do Psychedelic Medicine Companies Owe to the Community?